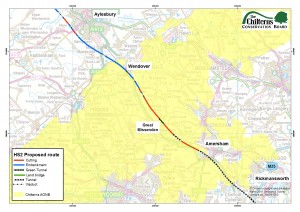 The proposed tunnel would be on the red & green bit next to Amersham on this map. Click to enlarge.

In a desperate attempt at a bit of greenwashing, the Government has said that it is delaying the decision on whether to build the high speed rail project until January. The Government is proposing to build an extra mile and a half of tunnel under the Chilterns, which would still leave the 225mph railway exposed for five miles in a statutory designated Area of Outstanding Natural Beauty. This move would also mean that materials and equipment depots and construction workers accommodation would have now to be sited inside the AONB. To find half billion pounds to pay for the tunnel, mitigation measures on other areas of the line which includes almost 50 ancient woodlands and 170 wildlife habitats, would be downgraded.

“This is a desperate attempt by the Government to buy off a bit of the opposition, trying to bill this as good for the environment, when for the sake of a mile and a half you downgrade the environmental protection measures elsewhere. This revision to the plan creates more blight for more areas for more money. Is that really the best they have got? Besides the half billion this is going to cost, people have to remember there has been no Environmental Impact Analysis carried out yet which is certain to jack up the cost again. In terms of mitigation for humans, we still haven’t seen the first hint of the plan for sound barriers, so how would those be paid for?”

“There is only one way to properly bury HS2, and that is to put it in it’s grave.”Everything about HS2 has ‘disaster’ written all over it. This move is just to try and get HS2 through in this Parliament so that the Conservative-led Government can claim the credit for it in the future. They should be more guarded about looking at the future political benefits of pushing through this whimsical boondoogle. None of the claimed benefits for HS2 stand up to any scrutiny, which is why the arguments used to justify it have kept changing as we have knocked them down one by one.”

“We really need to know where this £500 million has actually come from. Who is going to suffer potentially as a result of it? But our opposition is really is a principled one, because of the business case, because of the poor environmental gain on this and the fact there are much better alternatives for the £33bn they are planning to spend on this.”

Chair of Stop HS2, Penny Gaines said;
“In October, Stop HS2 said Justine Greening should delay making a decision about HS2 so that she had enough time to understand the issues and make a properly informed decision.  Justine Greening told the Transport Select Committee she intended to make a rational decision about HS2.  It looks like she is delaying the decision, but meanwhile her officials are scrabbling round looking for a way to buy off a few people in the Chilterns.  We hope that she realises that opposition to HS2 is because the project is a bad project for the nation, and that when she does look rationally at the HS2 proposal she will see this as well.”

“As far as the AONB is concerned this proposal makes things very much worse.  We know that the greatest damage and disruption will be at tunnel entrances – materials and equipment depots, massive caravan site for the work force etc.  If the tunnel is extended by 1.5 miles the tunnel entrance and associated devastation will no longer be on the southern border of the AONB, it will be right inside it.  Anyone who thinks this will be more acceptable is certifiable. The damage it will cause to the Chilterns and to many miles of beautiful, unspoilt English countryside along the HS2 route is one of several reasons why this extravagant and unnecessary plan should be buried so deep that it never re-emerges.”