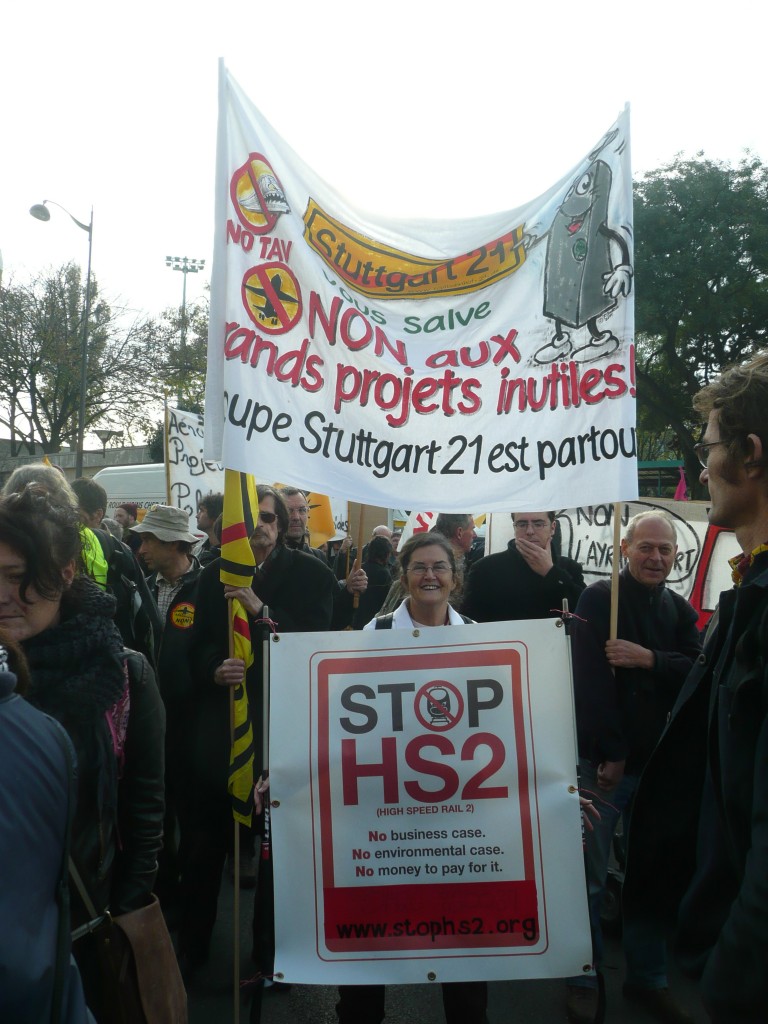 The STOP HS2 banner was flying high in the streets of Paris last Saturday as part of a joint demonstration with other groups who oppose high speed rail projects across the EU. The demonstration was initiated by a group opposed to the building of a very large and unnecessary airport in Nantes. They invited other groups like those against high speed rail, who share common problems concerning the undemocratic imposition of large, unnecessary and unsustainable infrastructure projects and over 3000 turned out from France, Germany, Italy, Spain and the UK.

“There is a clear reluctance amongst supporters of HS2 in Britain to accept that there is widespread opposition to high speed rail projects across Europe. STOP HS2 has been told again and again that we are isolated and backward, and that we need to catch up with citizens on the Continent who all support high speed rail. Well this demonstration showed how untrue that is.” 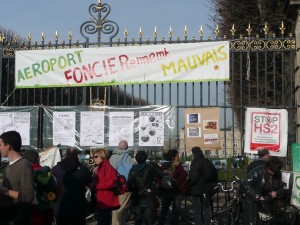 The Stop HS2 banner takes it's place with international counterparts

“Supporters against the Stuttgart proposals made it clear how the S21 rail proposals ignored economic, technical and environmental concerns including the highest level of conservation protection[1]. Additionally, the governance process around the project was deeply undemocratic. Exactly these same issues were repeated by, amongst others, the Basque movement against high speed rail; the Gironde movement; the Limousin movement; and the Susa Valley ‘No TAV’ group from northern Italy.”

“Unfortunately, another shared aspect amongst a number of these movements against high speed rail is police and army violence against protestors including the use of tear gas, water cannon and imprisonment. Sunday’s demonstration was peaceful but people from the Susa Valley told us about the militarisation of the valley where the high speed train is due to go – a fence and the army prevent people, including farmers,  from accessing their own and public land. The Susa Valley group are appealing to the EU Parliament to take a more pro-active role in questioning both the rationale for these projects, particularly in the current economic climate, and the way governments are forcing them on communities in some cases using violence.”

The common threads amongst the groups opposing high speed rail across Europe has inspired them all to sign up to ‘The Charter of Hendaye’[2]. This sets out the common features of HSR projects which, like with HS2, include the inadequate business, economic and environmental case for projects that are undemocratic and absorb huge sums of public money. It asks the EU to call a halt to large, unnecessary projects and proposes alternative ways to address rail capacity issues – just as HS2 has done. 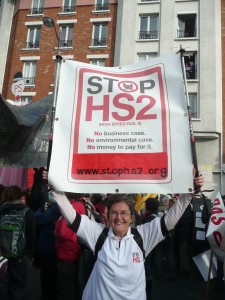 “It was astonishing to see how much common ground there was between the Stop HS2 movement and these many others in Europe. I only hope that Mr Cameron takes himself seriously when he said, at the time that we were demonstrating, “We should look sceptically at grand plans and utopian visions”. The French and Italian farmers that I was marching with would say ‘Yes, and that includes these large, unnecessary, very costly infrastructure projects!’

[1] A wider discussion of the S21 project, and a full translation of the arbitrators report can be found on the STOP HS2 website: http://stophs2.org/news/1205-stuttgart-21-germans-object

[2] A translation of the Charter and the original website can be found on the STOP HS2 website: http://stophs2.org/news/3103-is-europe-happy-with-hsr