Thousands of members of the Berks, Bucks & Oxon Wildlife Trust have already completed the Government’s consultation questionnaire, and there’s still time for more people to ‘speak up for wildlife’ before the consultation ends on 29 July.

“This week we’re sending more than 2,000 completed forms to the Government, and many people told us they used the online form,” said Philippa Lyons, chief executive of the Berks, Bucks & Oxon Wildlife Trust (pictured with a wheelbarrow of forms). 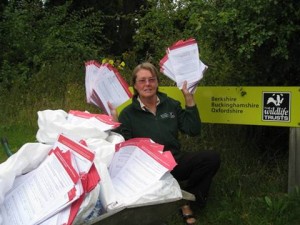 “We are hugely grateful to our members who responded to the consultation.”

People can go on to the Wildlife Trust’s website, read about the beautiful woodlands and wildflower meadows the route is likely to devastate.

“The Government in its recently published Natural Environment White Paper recognises the need to remove barriers to the movement of wildlife, but HS2 will be just that – a 75metre wide sterile corridor with a core of concrete, steel and gravel,” says Philippa Lyons.

“High Speed 2 is on track to break up dozens of valuable wildlife sites like important chalk streams and ancient woods.”

A significant population of rare Bechstein’s bats, one of the UK’s rarest mammals, is located in woods close to the proposed HS2 route. Radio tracking shows some of the bats move between the woods, which mean they would be affected by HS2.

“This is just one example of the wildlife threatened by the railway,” says Philippa Lyons. “There are also water voles on the River Misbourne, and black hairstreak butterflies in north Bucks.”