Last October, we produced a short leaflet which said “The 72 metres ‘no vegetation’ width is wider than Wembley (69 metres).”

“No vegetation” was the phrase used in one of the documents put out by HS2 Ltd in March 2010. You can download it from here.

Page 12 of the document, which has the compelling title of “High Speed Rail London to the West Midlands and Beyond HS2 Technical Appendix”, says

“The project shall assume an allowance of 25m of no vegetation on each side of the route, resulting in a total footprint for a two-track line of route of 75m width and 110m width for a four track railway.

“Where space is restricted, the minimum two-track fence to fence width may be reduced from 25m to 15m. This reduction shall only be accepted exceptionally for short distances where no other solution is viable. The corridor width of 25m should be retained to allow for the inclusion of access tracks etc.”

At the technical seminars held by HS2 Ltd in 2010, attendees were told that the fenced zone could be reduced to 22m wide (from 25m) and we allowed for that when writing our leaflet.

Seeking the most uptodate information he could, earlier this year, one of our supporters issued a FOI request and got the following letter back: 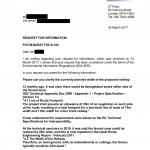 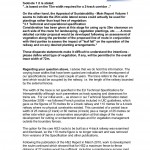 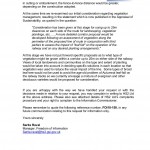 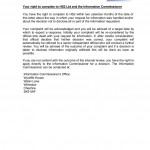 Pulling out a paragraph from p3

“At this stage we have not put forward specific proposals as to what type of vegetation might be grown within a corridor up to 25m on either side of the railway. Views of local landowners and communities on the type and extent of planting would be taken into account in deciding specific solutions in each location so that vegetation was used to reduce the visual impact of the line. Some types of broad leaf tree would not be used to avoid the age-old problem of Autumnal leaf-fall on the railway tracks so we currently envisage a mixture of evergreen and other deciduous varieties would be proposed for consideration.”

So in March this year, HS2 Ltd were saying the landtake is still wider then Wembley along much of the route, but nobody knows where it will be less.

And if you want the most up-to-date view of HS2, you can see what Alison Munro, Chief Executive of HS2 Ltd had to say last week, in a letter published in the Bucks Free Press:

“We would therefore seek to manage woody vegetation on the land up to 25 metres on either side of the line.”

So in June 2011 the latest information from HS2 Ltd is that the landtake will still be up to 72m – or wider then Wembley.