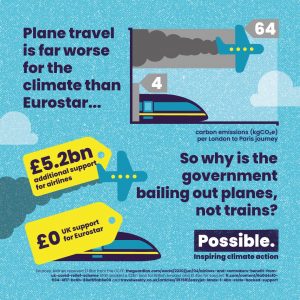 One of the issues with HS2 is that it does not connect with HS1 and the Eurostar.  Spending over £100bn on HS2 will not make it possible to travel from Manchester to Paris on a single train.

Not that this might be relevant in the future. Like the rest of the railway from London – where trains from Euston to Manchester and to Birmingham have been cut by a third – Eurostar numbers have massively dropped, with just two trains per day leaving London St Pancras for the Continent.  There is real concern, both within the rail industry and outside it, about the future of Eurostar.

With the continued government support for building HS2 – even though the economic case was very dependent on ever-increasing passenger numbers – you would expect them to support a high speed railway that actually exists.

And yet while the Government are spending over £5bn on supporting air travel, their support for Eurostar comes to exactly £0.

PS The graphic is from the WeArePossible campaign.