After it was confirmed over the weekend by Lord Berkeley that the Oakervee Review into HS2 is being written by DfT mandarins and will not be published until after the General Election, direct action against the project spread to a sixth site today (Monday 4th November).

Whilst Conservative MP Maria Caulfield claimed last week on Sky News that the almost unabated environmental destruction which HS2 Ltd are currently engaging in is ‘fake news’, campaigners moved into attempt to block access into a site near the Colne Valley Visitors Centre at Buckinghamshire Golf Club in Denham today, meaning that direct action from residents is currently taking place in five nominally safe Conservative seats already in the run-up to the General Election.

Soon after becoming Conservative leader Boris Johnson, whose own Uxbridge Constituency is impacted by HS2, announced that former HS2 Chairman Doug Oakervee, who he heralded as the right man to head up the project in his Daily Telegraph column in July 2013, saying “Doug Oakervee is a brilliant man to have in charge of HS2, and if anyone can deliver it, he can.”, would come back to conduct what he described as a quick, independent six-week review into the project. However, vice-chair of the review panel Lord Berkeley tweeted at the weekend:

My role as dep chair of the Oakervee Report on HS2 finished yesterday. Report not finished and no opportunity to influence conclusions. We are told that, when completed by Doug O and the DfT secretariat, it will be locked into the DfT vaults for the new S of S to publish.

The news that the supposed independent review into HS2 is actually to be written by civil servants at the Department for Transport, and will not report until after the election has been taken by the Stop HS2 campaign as confirmation that the review will be a whitewash, with the whole exercise a cynical electoral ploy to take the highly unpopular project off the election agenda.

“With Doug Oakervee being a former chair of HS2 Ltd, we had always been dubious that his review would be anything other than a ruse to try and con voters, but now it has been confirmed that it won’t report until after the election, we are now certain that is the intention. Worse than that, Lord Berkeley has confirmed what we feared, that the review is actually being written by mandarins at the Department for Transport, the very people who have covered up the truth about this fraudulent project since the very start.”

“The Conservative game plan is to use the review to try and take HS2 off the election agenda, but given that voters can see the damage being done and the money being burned right now along the line, asking them to pin their hopes on a review which is increasingly looking like it will be a whitewash is an insult to the intelligence of the general public. As a direct result of HS2 Ltd desperately ploughing ahead to try and make it impossible for the next Government to cancel this white elephant, as of today there are six sites in five nominally safe Conservative seats where direct action taken place over the last couple of months. This is not going to go away and HS2 is going to be a far greater issue at this election than politicians are expecting.”

“We are increasingly concerned about the delay of the Oakervee report.  While the chair is not as impartial as we would have hoped, it is the first time that HS2 has been properly looked at.  We are also really concerned that it is possibly being written by HS2 staff and the Department for Transport.  It was supposed to be out in October, but as with all things HS2 related, it has been delayed until at least December, and will possibly never see the light of day.”

“We call on the Government to immediately halt environmentally damaging enabling works on the HS2 route until after the election. During the election period, no-body will have a Member of Parliament who can hold HS2 to account and inform the Government if HS2 are over-reaching their powers.  We are really concerned about this, knowing HS2 they will try and do as much damage as possible and present it to the new Government as a fait accompli.”

“HS2 does not have Notice to Proceed, it should be told by Boris Johnson’s Government to stand down immediately, and halt all works. The only thing they should be doing now is paying people for the homes, land and businesses that HS2 has already taken, but they aren’t so keen on that one.”

“HS2 is a hugely expensive environmentally damaging white elephant, which according to HS2 Ltd’s own figures will still be causing increased carbon emissions into the 22nd century.  We call on all parties to commit in their manifestoes to publishing the evidemce presented to the Oakervee review and scrapping HS2.” 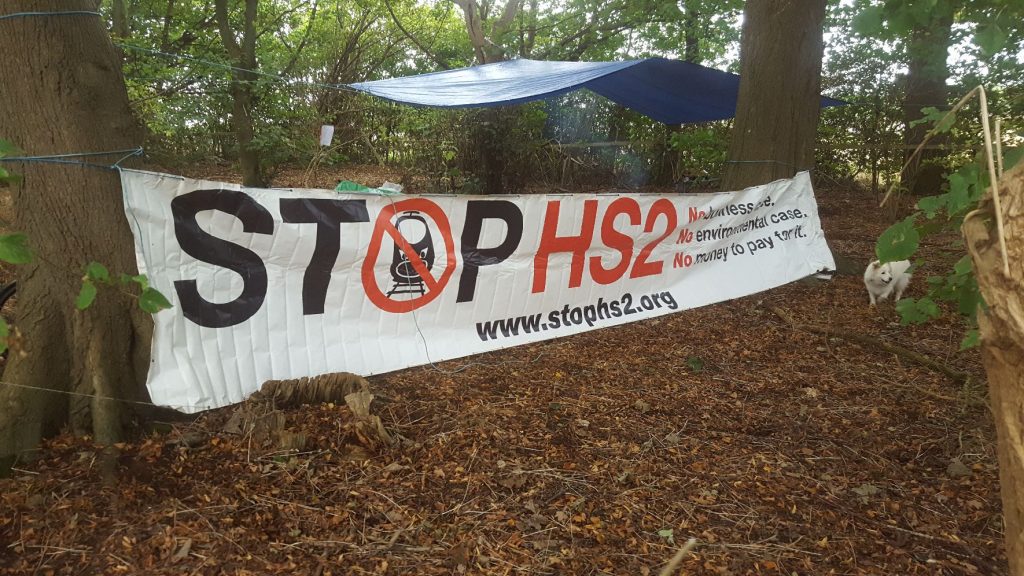 Whilst a protection camp has been in place for two years at Harvil Road in Harefield in the Ruislip, Northwood and Pinner Constituency which Conservative MP Nick Hurd will not defend, in the last two months direct action from residents has started in four other constituencies: