The Department for Transport has stated that it does not hold any record of how much has been spent on buying property along the proposed route of HS2, claiming that this information is held solely by HS2 Ltd. This is despite the annual accounts of both organisations have always maintained that buying property along the route of HS2 has always been completely the responsibility of the DfT. 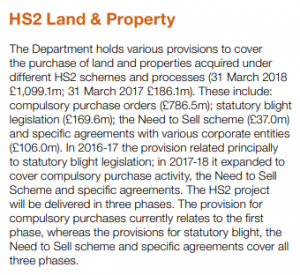 This revelation comes on the back of a multiple of scandals concerning the acquisition and estimated costs of property for the project, which included what whistle blowers stated was a deliberate policy to mislead of Parliament over the property cost. More recently HS2 Ltd have been seizing farms and business properties without payment, and it is now reported that was is alleged to be a standard practice of undervaluing the true cost of properties will result in a £500m lawsuit concerning the  under-valuation of office blocks surrounding Euston Station. Michael Gross, founder of Sydney & London Properties which owned site, told the FT:

“HS2 has misled parliament and deprived claimants big and small of their statutory entitlement to fair, timely and reasonable compensation. I realise I am the biggest claimant but I have a proven track record in similar situations of fighting pro bono for victims that couldn’t take care of themselves. This project has been mishandled from a structural and a financial point of view since the beginning.”

In response to a Freedom of Information request asking for the number of residential, business, and other properties which need to be bought along Phase 1 of HS2, the number that have already been bought, and at what the total amount of money has been paid is, the Department for Transport has responded:

“We have identified that the department does not hold the information you have requested because this is a matter for High Speed 2 who are a separate public authority under the Act.”

This directly contradicts the 2017-18 annual accounts of the department which states with regard to HS2 Land & Property:

The HS2 Ltd accounts are even more unequivocal in their assertion that purchasing land and property is the sole responsibility of the DfT, stating:

“It is a matter of public record that buying properties along the route of HS2 is and has always been, the responsibility of the Department for Transport and this is specifically highlighted in both their and HS2 Ltds annual accounts. For the DfT to say that they do not know how much they have spent on buying land and property on the HS2 route, displays not only a complete lack of anything resembling competence, but also shows they have no interest in exercising any responsibility for the billions of taxpayers’ money they have been entrusted with. The fact that the DfT neither know or care how much money HS2 Ltd are spending in their name tells you everything you need to know about how out of control this white elephant is, and why it must be stopped before these inept wastrels blow even more money that they can’t be bothered to count.”