Earlier, Mr Rukin had presented the Minister with a bow saw, so that after she had “Heard the spin about greenwashing” she could “Get on with the real work of cutting down some of the 63 ancient woodlands on Phase 1.”

Before being escorted off the premises, Mr Rukin pointed out that the event was being held dead in the middle of where The Wildlife Trust had shown has the densest number of habitats impacted on Phase 1 of HS2, on a smallholding farm which HS2 Ltd accepted they had made uneconomical to farm.

As a result, Rukin had wanted to put the complaint in the hands of the Minister, and as such locked the gates to the farm, stating that all he wanted to do was put an envelope in the hands of Ghani, after which he would unlock the gate. However, Ghani refused this request and a locksmith was sent for to cut the lock, and the bow saw was returned by a member of the press. 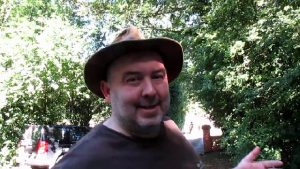 “It doesn’t matter how much HS2 Ltd want to dress up their attempts at environmental mitigation, this is a railway that from the outset has been designed to be as environmentally destructive as possible, so it was totally appropriate to give the minister a saw in the face of this greenwashing.”

“I made it absolutely clear that I was in possession of complaints from a Whistleblower within HS2 Ltd, who felt that the only response to their reporting of potential fraud, corruption and misuse of public money was for HS2 Ltd management to dismiss all of these very detailed and serious complaints, and then instigate a policy of coordinated bullying to try and identify who the Whistleblower was. It was clear that there was no point in me giving these complaints to a member of HS2 Ltd staff, so I did not think it was unreasonable to be allowed to simply place the envelope containing them in the Ministers hand, and I would have thought she would have realised this was the right thing to do. That was all that I wanted, but instead of even agreeing to look at these complaints, which I understand the National Audit Office are now investigating, she sent for a locksmith. This is typical of the level of disdain to the genuine problems with HS2 we have seen since the outset, and it is this laissez-faire attitude of nonchalance from politicians that have allowed problems to fester, resulting in HS2 continuing to require billions and billions of pounds more than it did before.”

The attempts at Periscope broadcasts didn’t work exactly as hoped, but they can be found at: https://www.pscp.tv/joerukin