Last month, we reported on the fact that a section of the Shropshire Union Canal in an area with a long recorded history of subsidence and sinkholes – due to salt mining and brine extraction – had collapsed. 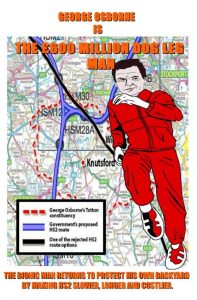 This has led to a renewal of the concern that the proposed route of HS2 through Cheshire might be vulnerable to subsidence, which has been on the cards ever since George Osborne decided an extra £600m should be spent avoiding the richer areas of his then Tatton Constituency, something there is absolutely no proof of whatsoever apart from the really obvious fact that HS2 bends back on itself, and that at the time Council Leader Michael Jones sent out a press release saying this was exactly what had happened, and thanking Osborne for his part in it. 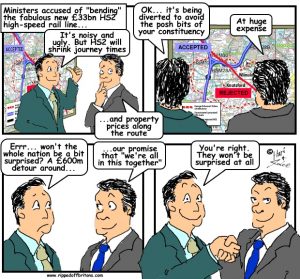 Obviously Jones’ statement was a PR disaster as it absolutely confirmed that Osborne had sacrificed £600m of taxpayers money, along with his constituents in poorer areas to save those in the ‘Golden Triangle’, so Jones tried to retract his praise saying he was ‘mistaken’. But surely no-one besides the most ardent supporter of HS2 ever bought that one?

What is more of a surprise is that it has been claimed that the failure of the embankment last month absolutely, certainly was not a sinkhole, as there have never been any sinkholes or subsidence in the area, and most certainly none that have ever impacted on the canals.

Just to dispel any doubt, Ros Todhunter, an actual qualified professional geologist, has handily been able to use one of HS2 Ltds own maps to show that not only have been three canal failures on two different canals within about a mile of each other (all of which are less than a mile from the proposed HS2 route), but that this areas is most certainly peppered with known sinkholes, or ‘subsidence hollows’ to give them their more scientifically correct term. 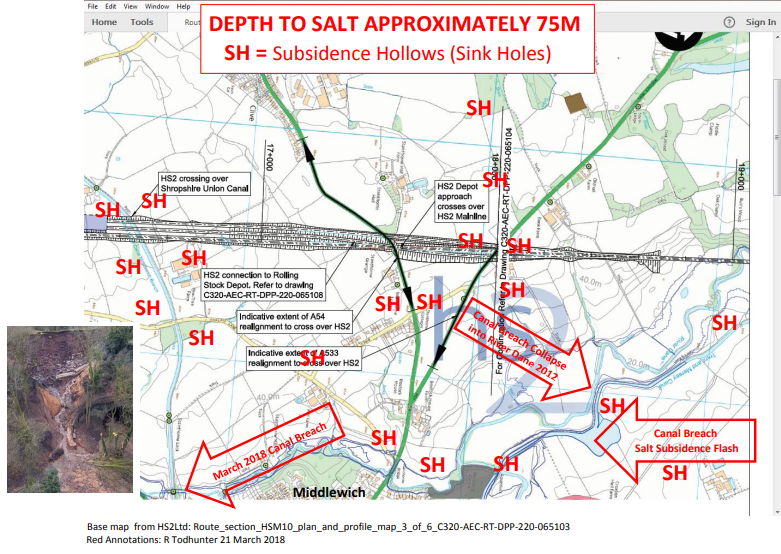 Just to be clear about this, due to around 2,000 of salt mining in the area, fresh water keeps getting into former rock salt mines and dissolves the salt walls and roofs. Those mines keep collapsing and more sinkholes form. There have even been cases of rivers flowing backwards into salt mines. More salt gets dissolved, the sinkholes grow bigger and in some cases they flood to form ’flashes’.

Historically, all of this dissolved salt made things even worse, as for decades this highly concentrated brine in  flooded sinkholes was pumped out for use the chemical industry. Fresh water would then be pumped in, more salt would dissolve and Northwich would continue to sink. This ‘bastard brine’ caused maybe the most insidious part of the subsidence toolkit: brine runs. Basically, throughout Cheshire – through more or less 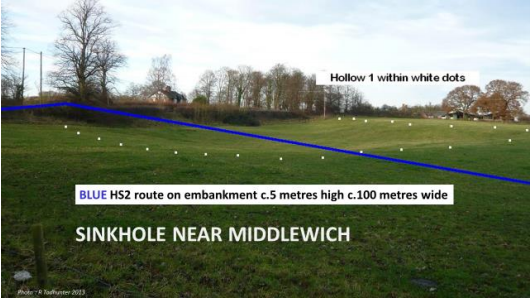 anywhere that ends in ‘wich’ – there are underground rivers of brine and no-one knows where exactly they are. One thing we do know about these ‘brine runs’ though is that they are still evolving, and just like overground rivers, they flood. But of course when a brine run floods, it ends up dissolving hitherto untouched rock salt, and guess what, you get more sinkholes.

As the picture of labelled ‘Sinkhole near Middlewich’ demonstrates, sinkholes don’t always manifest themselves as massive holes in the ground, they can be nice gentle dips like this one that most people wouldn’t even notice. However, the rather large issue when you are considering building a 250mph railway is that this is an active sinkhole, in an area of active but unknown subsidence. This has always been the point we have been trying to make. 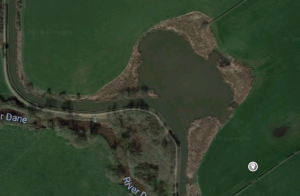 An overhead picture of the Croxton Flash on the Trent and Mersey Canal, which appears on the map shown earlier in this article.

Historically, there have been two types of canal breach in the area; failures such as the one last month and the one in 2012 when embankments have collapsed causing canals to drain, and ‘flashes’ where a sinkhole next to the canal simply fills with water.

The most notorious collapse was on the Trent & Mersey Canal in 1907, when according to witnesses, “The bank of the canal gave way and the rush of thousands of tons of water … scoured a gaping chasm some sixty feet across and some thirty deep.”

The failure of the canal had been caused by the collapse of the Marston Hall Mine which was under the canal. Its 28 acres of caverns, had started to flood in 1905 and had now got to the point where they undermined the canal bed. The most important lesson about this collapse was that a lesson was actually learned. When the Old Marston & Adelaide mines collapsed in 1958, their subsidence had been predicted, meaning the canal had already been diverted to avoid this underground timebomb. 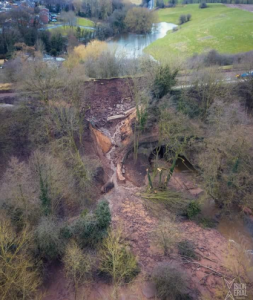 Another photo of the Shropshire Union Canal Collapse shows the only damage to the abutments is due to the collapse, and that flood water has collected upstream, on the other side of the canal.

Given all of this, it’s been quite odd to hear anyone to categorically say that the Shropshire Union collapse “Wasn’t a sinkhole, it was an embankment failure”, when there has been a long history of sinkholes causing embankment failures in the area. Quite simply, if you have a massively steep embankment and the ground below it sinks an inch, your embankment will collapse. It’s not like that hasn’t happened before.

Another theory has been that high river levels washed out the abutments, but of course there are two problems with that. First, the photos show that whilst damaged by all the stuff that fell on them, the abutments are still in place and for abutment damage to have caused the collapse, the river would have had to have been running the wrong way (which could only be caused by a sinkhole!), as this video from the Canal Trust shows.

In fairness, there is half an excuse for thinking the reason for the collapse is because the water level was high, as history has shown us with previous collapses is that when the water level is high above ground, it is high below ground, and it is at exactly these times that water reaches hitherto dry salt and causes collapses. 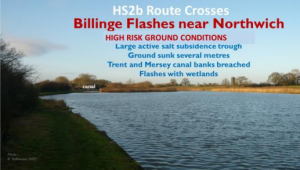 The most bizarre statement we’ve seen of course is that there are ‘no brine fields or historic subsidence’ in the area, when the Croxton Flash is there for all to see on the map. The difference there is that the sinkhole isn’t on an embankment, it’s at water level, so there was never any spectacular collapse, just the addition of an odd shaped pool to the side of the canal.

Of course the Croxton Flash is nothing like as ‘obviously not meant to be like that’ as the Billinge Green Flashes, one of which is shown below. To think there is no history of subsidence in the area, there must be some people who actually think the canal must have been designed this way! Again, this is the area HS2 is planned to go through….. 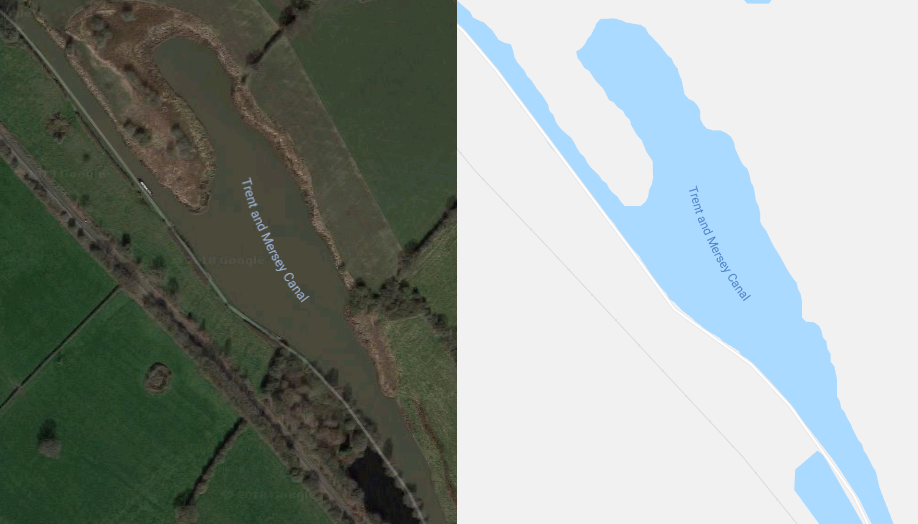 One of the Billinge Green Flashes. Just in case you weren’t sure, the Trent and Mersey Canal was not designed to look like this, but a sinkhole (or to be absolutely precise, a ‘salt subsidence trough’) opened up, the ground sank and the canal filled it. Before that, the canal was straight and thin, like it still is in the top left corner. You know, like canals are designed to be! While the engineers that built the M6 knew to go round this sort of thing, HS2 is planned to through this area.

email
Tags: News
News
One comment to “The HS2 Cheshire route – a long history of subsidence.”