Today, HS2 Ltd have released a suite of reports from the Infrastructure and Projects Authority covering the period of September 2013 to September 2015, following the First-tier Tribunal’s judgment to order publication in the Ewing/Rukin case. The most significant revelation is that the most recent report questioned whether Phase 2 of the project is affordable, stating:

“Most significant at this stage is affordability within the capped budget of £50.1bn (Q2 2011 ECs) for HS2 as a whole. A major efficiency programme is under way to identify opportunities to design and build to cost. This is an area that will need constant monitoring and control, not least given some suggestions that 40% optimism bias on Phase 2 may be inadequate. In general terms overall schedule risk, leading to cost growth, needs to be monitored and managed for Phase 2a to be affordable. Should it transpire that Phase 2 as a whole is not affordable the prioritisation of Phase 2a should be revisited.”

“Delivery of the whole scheme within this [budget] looks challenging. Work to identify efficiency measures is under way but at an early stage.”

The specific areas of concern in September 2015 were: 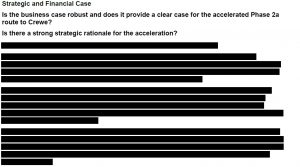 What passes for ‘freedom of information’ at HS2 Ltd

It is impossible to determine what the IPA thought of the plans to accelerate the plans for Phase 2a to Crewe as the answers to the questions “Is the business case robust and does it provide a clear case for the accelerated Phase 2a route to Crewe?” and “Is there a strong strategic rationale for the acceleration?” have been redacted in their entirety.

Whilst the costs of HS2 officially increased to £55.6bn just after the final report was completed, HS2 Ltd have consistently claimed this increase was purely to take account for inflation, to update 2011 prices to 2015 ones. However, a previous FOIA request has shown that this is not the case, with the Phase 2 cost having increased by 39%. This confusion about costs is highlighted in these documents, as it is notable that references to the actual costs of HS2 Ltd were working to have been redacted. 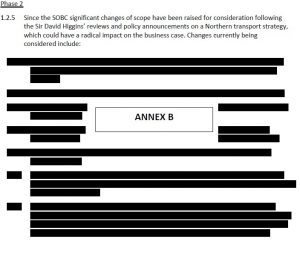 Despite the fact that changes to Phase 2 were announced in 2016, the options which were being considered in 2014 have also been redacted in full.

There is also significant concern over the timescales of HS2, with the December 2014 report stating;

“The current Baseline 4 schedule has a low probability with respect to a December 2026 opening.”

Concerns about the timetable come up throughout the documents, which when compared together make it clear that the project is significantly late. In the September 2013 report, enabling works were meant to start in 2015. By the 2015 reports, these enabling works were due to start in 2016, with the July 2015 report stating “There is only a four month float in the overall ten year delivery schedule”. Given that enabling works only started in 2017, this float has already been surpassed. However, instead of admitting this, HS2 Ltd and Government have continually denied there have been any delays to the project, and have now attempted to ‘rebrand’ the enabling works as construction so they can claim construction has started on time. 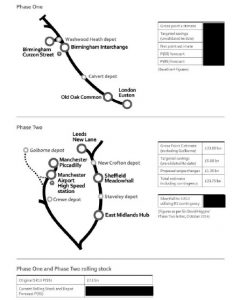 One of several incidences of HS2 Ltd redacting the costs they are actually working to.

The annual report of the IPA has rated HS2 as ‘amber-red’ consistently for the last five years, making it officially the worst-run project on the Government book.

“We have been fighting for four years to get some of this information released, and now the Government have been ordered to publish, it is absolutely damning. We can see there are massive concerns about the affordability of HS2, but they keep redacting the actual costs they are working to, and it is absolutely clear that the project is running about two years late whilst claiming it is ‘on time and on budget’. There are a whole host of other problems, but HS2 Ltd will now claim that these are old reports and everything has now been sorted out, but that is what they always say, and if that is the case why is so much of these reports redacted? We will continue to fight for the publication of subsequent reports, including the major review by Sir Jeremy Heywood.”

“These documents make it absolutely clear that there are massive concerns which remain unaddressed, because we keep seeing the same problems being raised every year. Government treat HS2 as the golden child that can do no wrong, which is why these issues that guarantee the project will be an unmitigated disaster are left unchecked. It is long past time for ministers to get a grip and put this white elephant out of its’ misery.”