This weekend travelers will get a taste of things to come, as Euston station will be closed whilst HS2 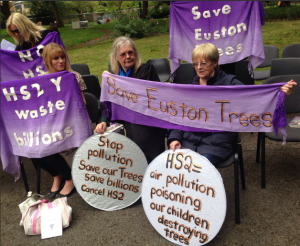 preparation work takes place. The work, which has been reported to involve dismantling a good shed near the station and rerouting electrical lines, had not originally been scheduled to include a closure of Euston station, but because Euston will be closed, Network Rail has decided to take this opportunity to carrying out maintenance work all the way up to Watford Junction.

What is happening this weekend is simply part of preparation work to allow the start of the building of the station to happen at some point in the future, and does not include any construction. Currently all that is happening is demolition, destruction and the desecration that began in St James 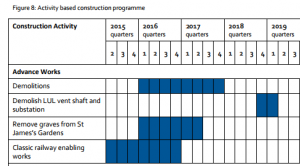 Gardens on Wednesday following the memorial service. St James Gardens is the perfect example of how late HS2 is, as the exhumations which are starting to now take place were originally scheduled to have finished by now.

Actual construction at Euston is due to take at least seventeen years, but this is still a long way away as the contracts for the design of the station are still at the tendering stage, with the final design of the track layouts a year. Whilst the closure this weekend wasn’t originally meant to happen, no-one has ever been able to give the slightest hint of what at least seventeen years of construction, which includes the closure of two of the approach tracks for an unknown period of time will mean to services.

email
Tags: News
News
One comment to “A Prelude to Two Decades of Travel Chaos as HS2 Prep Work Starts”