On Wednesday 23rd August at 10am Camden residents will be holding a final memorial service for the sixty thousand souls buried in St James Gardens next to Euston station, before HS2 Ltd begin the process of exhuming their bodies, and cutting down all the magnificent centuries old London Plane trees on the site. The start of these ‘preparation works’, which will mark the beginning of the environmental destruction HS2 will reap nationwide, are already over a year and a half late. 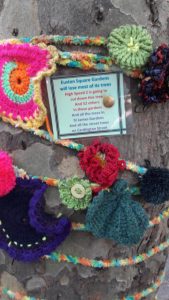 Residents, who have campaigned tirelessly to save this site and other trees around Euston will congregate for photos and interviews at 9-9:30am in south east corner of Euston Square Gardens, and after the St James Gardens service, outside the gardens.

“In times of austerity, this vanity project is an insult to those in the NHS, in education, in the fire services and the police force, all suffering cuts while this rich man’s railway sucks up over a hundred billion of our money”

Many residents attending the event have exhausted the democratic process to challenge HS2 Ltd and have formed an action group “Save Euston Trees” to consider what options are left to prevent the felling of more trees in Camden, some of which are only planned to be chopped down as part of temporary possession of the land during construction. Recently, residents have opted to ‘yarn bomb’ threatened trees, by knitting scarves round them to highlight their plight, but recently, these woolen reminders have been disappearing.

Over 500 trees are to be felled in Camden because of HS2. These trees help clean the air in one of the most polluted areas in the country, with there being more than 400,000 early deaths caused by air pollution in Europe. Residents feel that as the UK Government has been successfully sued a number of 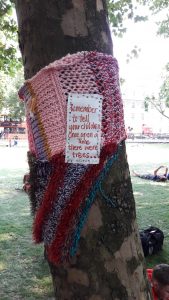 times for air pollution levels, that as a result of HS2’s destruction and pollution, it should expect to be sued again. Recently, it has been reported that local residents have been told to keep their windows shut for 17 years because of air and noise from air pollution which will arise as a result of HS2 construction, creating a generation of blight.

“As democrats and citizens we are right to be worried and angry. It is a conspiracy by government against the people. There is no popular support for HS2 and no rational case for it. It is a ludicrously expensive, almost entirely useless, a destructive white elephant. In imposing the scheme parliament has corroded the standards of proper government.”

“We cannot understand why the fifth richest nation in the world accepts that thirteen million of our people live below the poverty line and depend on charity to feed their children, even though they are employed. The austerity measures of this government have not worked, the economy has not recovered. Austerity should come to an end now, and sufficient to live on be guaranteed to everyone. Put the money back into the hands of the whole people, and they will spend it and stimulate the economy.” 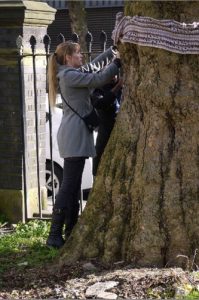 “Euston Foodbank is visited  four days a week, by  a rolling subsection of the people society marginalises coming to collect food they can no longer afford to buy. They are angry and ashamed and we are ashamed to live in a city where there is enough food to feed all Londoners, but we leave tens of thousands in food poverty, and it is down to volunteers in our Foodbanks to redistribute the food more equitably. “

“It is obscene to spend around £100billion on a railway for which the economic case is not proven. The only people who will benefit are already rich enough to cream off profits from the oversite development. Instead the money should go to the NHS, the schools and projects like the electrification of all the railways instead of allowing diesel engines to continue to pollute the air and poison our children. The technology will be out of date before HS2 is complete.”