One of the many aspects of HS2 which has been criticised, even ridiculed, since the outset of the project has been the business case. One of the fundamental gaping holes in it has been the grossly inflated passenger forecast which was used to justify the need for the project. With these passenger numbers, the business case proudly claimed that HS2 would stand alone among high speed rail networks around the world, and it would actually make a profit. 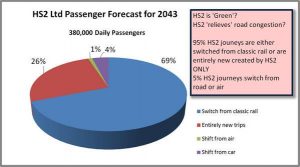 The grossly-inflated HS2 passenger forecast, which has been fundamental to the business case.

It did not seem unreasonable to presume that as the Government stated HS2 would absolutely run 18 trains per hour each way, they had an estimate for the passenger numbers and an estimate for the fare revenue, then they must have an estimate for the ticket prices, as it would be impossible to work out the total revenues without them. However, every politician who has been asked about this has on one hand denied HS2 would inevitably be a premium service, saying the fares would be the same as the ‘classic’ service, whilst on the other hand point-blank refusing to say this would be the case, saying “That would be for a future Government to decide”.

You might be forgiven for thinking that now the franchise for HS2 has gone out to tender, there might be a better idea of what the fares, and indeed the revenues which were previously stated in the business case, might actually be.

In fact what we’ve actually had is an effective admission that not only has no-one got a clue, but that no-one has ever had a clue. Shadow Secretary of State for Transport Andy McDonald recently submitted this written question;

“To ask the Secretary of State for Transport, what estimate he has made of the annual total fare income from High-Speed 2 services as part of the West Coast Partnership franchise.”

This is the answer from DfT Parliamentary Under-Secretary Paul Maynard;

“The West Coast Partnership will be tasked with optimising the post-HS2 commencement service offer, utilising the total capacity available on the High Speed and intercity conventional services. This is something they will undertake during the early years of the franchise in preparation for the HS2 service launch in 2026.”

Whilst that answer was an attempt at evasion, in reality it is an admission that not only is there no estimate and it’ll it’s a while before there is, but also that there has never really been one. The correct answer to the actual question would have been “There isn’t one”.

But more than that, the answer now seems to suggest the service patterns for both HS2 and the WCML are not something Government seem to be bothered about, as these decisions will be left to the franchise winner. This statement completely undermines many of the ‘facts’ from the HS2 business case which we have been told would be absolute over the last seven years, but as we always knew the business case was made up, I suppose it’s no real surprise.

email
Tags: News
News
6 comments to “Without realising it, Minister admits HS2 business case was made up.”