Being accused of making things up and lying by proponents of HS2 is something you get used to in the Stop HS2 campaign. Back in the early days it was standard to be told you were lying when you were actually quoting directly from HS2 Ltd documents, with two common favourites being the idea that current rail services will be cut if HS2 is built, and that their original design spec made it clear that the footprint of HS2 with an internal fence to fence width of 25 metres and ‘vegetation free zones’ of another 25m either side, was intended to be 75 metres wide, or as we put it ‘wider than the pitch at Wembley’ (69m), or bigger than six lanes of road (we measured the 6-lane A46 past Kenilworth at 70m).

In the case of the latter, the internal 25m was later dropped to 21m, with the VFZ renamed to something which sounded a little less like bare concrete. As this new 71m specified footprint did little to placate anyone, specifications of the footprint of HS2 disappeared from later documents. With the former, the official level of cuts to the existing rail network now stands at £11.2bn according to the latest HS2 business case.

Remembering back to those times, there were many other gems, such as the ludicrousness of the passenger forecasts, the clear environmental impacts and the fact that originally, death was not a good enough ‘exceptional  circumstance’ for needing to sell a home to qualify for the compensation scheme. But the one thing in the early days which became part of the standard script for presentations on HS2 which we completely admitted was speculation, but were sure was a certainty, was the idea that HS2 would lead to massive green-belt construction around out of town stations.

The reasoning behind this was that it was simply blatantly obvious that this would happen. Coupled with the fact that HS2 had been lobbied for by the construction industry, with the additional titbit that we had a Secretary of State for Transport at the time in Philip Hammond who had made his money in housebuilding, (though of course when he joined Cabinet his wife took over the shares in his firm, so that’s all totally above board), it was becoming clear that HS2 was in part intended to help solve Londons housing crisis, and it is simply a fact that more often than not, railways stations lead to developments around them.

The idea that this was simply speculation was then blown out of the water, when in March 2012 then HS2 Ltd Chief Engineer Andrew McNaughton said HS2 would lead to a ‘new city’ around the station near Birmingham Airport, filling in the Meriden Gap between Birmingham and Coventry. When the natural outcry ensued, McNaughton attempted to backtrack on this concept telling then MP Dan Byles that during his speech:

“At no point did I mention any new development in the Meriden Gap.”

He got away with this as he hadn’t mentioned the Meriden Gap specifically, and this was the official line until 2014, when of course the first set of plans to start this ‘new city’ development in the Meriden Gap were published.

With this on the cards, it became absolutely clear that the same thing was going to happen between Derby and Nottingham, and indeed south of Crewe, if the unplanned and totally uncosted new station there does see the light of day, and ditto with the even more unclear possibilities for a parkway somewhere in Yorkshire.

We were so certain of this in the East Midlands, that we warned it was on the cards, even before the site of the proposed HS2 station was announced, and now, finally, outgoing HS2 Ltd Chair Sir David Higgins has now confirmed this is the plan in an interview with the Sunday Times, saying of the planned Toton station:

“Toton will be a whole new city. The area has a lot of vacant land and Nottingham and Derby are either side of it with a very good university connected by a tram.”

The response to this from the local MP displayed a bit more local knowledge, with Anna Soubry tweeting:

As the MP for Toton this nonsense is irresponsible, stuff of fantasy from outgoing Chair of #HS2 #clueless https://t.co/OSJaJF4OPg

Of course she has a very good point, especially with the ‘clueless’ bit. Whilst development in the Meriden Gap between Birmingham (well Solihull actually) and Coventry is possible, if the small matter of the River Blythe flood plain can be negotiated and it is accepted that the former Bickenhill landfill site is a non-starter, in the East Midlands this concept is rather more problematic. 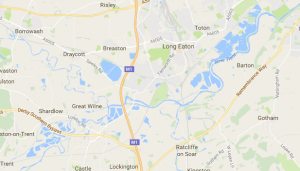 The flood plains of the Erewash, Derwent, Soar and Trent are all rather a bit more serious than the Blythe, with not just naturally occurring lakes in the area, but also flood prevention reservoirs and large tracts of land which regularly are allowed to flood, in the hope that that means Nottingham doesn’t.

Basically, besides the logistical nightmare it already would be to build in the necessary transport networks for the HS2 station, which has handily been planned to go right next to the heavily congested A52, there is a very good reason why there hasn’t been much development on the Nottinghamshire/Derbyshire border, the whole thing is a gigantic flood plain.

Put simply, if you wanted to build a massive development to accompany the HS2 station in the East Midlands, the only way they could have picked a worse place for it would have been to put it on a barge in the Trent.

The problem is that despite this evident display of cluelessness which permeates throughout the HS2 plans, most MPs are even more clueless and most likely will blindly vote as their whips tell them to do come next week.

To ask your MP to have a bit more sense, please visit http://www.foe.co.uk/go/hs2