It will come of no surprise to regular readers of this website to know that a new report on the ground conditions for the revised HS2 route through Cheshire has concluded the new route carries an “increased risk of subsidence” because more of it would go over “higher-risk” surfaces.

There has been long-held criticism of the route through Cheshire, ever since George Osborne was dubbed the ‘Six-Hundred Million Dog-Leg Man”, for ordering a kink in the route which took it around the richer parts of his constituency, such as Knutsford and Alderley Edge. However, this route took HS2 through the geologically unstable Cheshire Brine fields, which engineers had known they had to avoid back in the 1960s when they built the M6.

Earlier this year, HS2 Ltd moved the route, saying it solved these problems, even though beforehand they had never actually admitted to them, but a report from geological engineers TerraConsult claims it has actually made things worse. 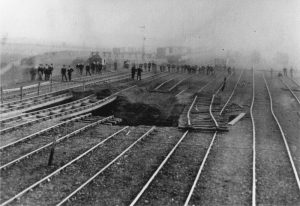 The report warns of “the potential for the rapid development of significant movement” in this area under the weight and vibration of trains, “with a consequent risk rating as high” and with reference to new embankments that “A higher embankment increases the applied loads . . . If the ground below is not strong enough, there will be a slope failure.”, with the consultants claiming a claim by HS2 that the route has been changed to “minimise the risk of subsidence” at an additional cost of £750m is “highly disingenuous”.