Camden Council has written to residents in the Cartmel block of Regents Park Estate, saying their homes could be knocked down if HS2 Ltd confirm a change to the design of the Hampstead Road Bridge, reports the Camden New Journal. 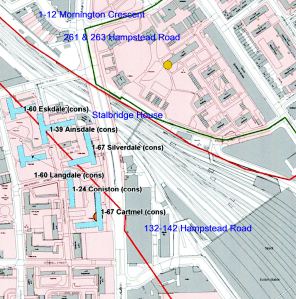 HS2 Ltd plan to start demolition of the National Temperance Hospital, which is opposite Cartmel, this year and knock down three other blocks on Regents Park as soon as Royal Ascent is received. Given that, the fact it has only transpired now that Cartmel is under threat seems unbelievable, but is typical of how poorly HS2 is being managed and how sketchy the plans for Euston still are at this late stage.

The council’s letter to the residents of 67 flats in Cartmel asks for views on the changes and says that HS2’s proposal “Would see Cartmel demolished with residents having to move out”, adding: “If HS2 Ltd pursued this option the council would seek further funding for replacement homes for tenants.”

Robert Latham, chairs of the HS2 Euston Action Group, said: “The current plans for Hampstead Road Bridge render Cartmel uninhabitable. We think demolition is the best option, and I believe most of Cartmel residents think so too.”

Camden Council are currently building new blocks of flats on the Regents Park Estate to replace Silverdale, Eskdale and Ainsdale which are already due to be demolished by HS2. But if Cartmel is deemed uninhabitable by the new HS2 design work, it is hard to believe that the 11-storey replacement tower block the council is building right next to it would be of any use.