Over the last couple of days, a number of papers have reported on the HS2 “jobs bonaza” that the “enemies of HS2” are putting at risk, citing an “independent” report published yesterday. An alternative way of looking at it comes from the the Guardian which says “In championing a jobs bonanza, the HS2 lobbyists really tell us they are rattled”.

The first thing of note is that these aren’t actual jobs in existence now: they are jobs that might come into creation, if HS2 goes ahead.  And the headline figures used aren’t even actual job numbers, they are “person-job years”.  In other words, if someone is employed by HS2 Ltd for 4 years, they might think they have one job, but the report accounts it as 4 jobs.

Even more interestingly, the report just looks at the “short and medium term to 2020”, a somewhat arbitrary date with no rationale to it.  So these aren’t jobs for life, they aren’t even jobs for the duration of Phase 1, they are temporary jobs. 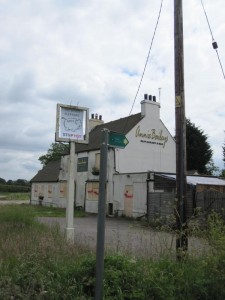 Annie Baileys – closed because of HS2

But what the report does’t look at are the jobs that are directly at risk because of HS2. Take Drummond Street near Euston, currently full of restaurants, but which will be cut off from passing trade during the 17 years of Euston rebuild.  Or Washwood Heath, a regeneration site in Birmingham which could have had thousands of permanent jobs – except for HS2’s plans to use it temporarily. And then there is another 1000 jobs which could have been created in Ashby de la Zouch. Or Annie Baileys, which was on the HS2 route and is now shut with a loss of all jobs there.

However the report is published by the “High Speed Rail Industry Leaders” and based on interviews with their members.  So this is not some dispassionate review, its being written for a bunch of companies who will make lots of money out of HS2 being built, following on from interviews with people who might personally get some quite large bonuses if they get the HS2 contract.  Even the author is involved with a company lobbying for HS2.  Hardly an independent review!

The final point is that if the government is going to spend billions on a temporary job creation scheme, is HS2 really the best way to do it?  You could spend the money and get a more sustainable set of projects: new houses for instance which would benefit a whole load more people than the relative few who might travel on HS2.  Or schools, or a wide variety of local transport projects.