Lichfield MP Michael Fabricant has proposed an amendment to the HS2 Hybrid Bill, in a final attempt to stop the bill passing over to the House of Lords. The Bill will receive its’ third and final reading in the House of Commons next Wednesday 23rd March, as will the amendment. 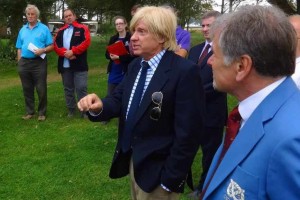 “That this House, while recognising the constantly increasing need for additional rail line capacity to relieve congestion on the West Coast Main Line and to improve connectivity between major cities and with London, and while recognising the valuable work of the Select Committee in making improvements to the route of the railway line, declines to give the High Speed Rail (London – West Midlands) Bill a Third Reading because the line as set forth in the Bill, as amended following its committee stages, has insufficient station provision to connect adequately with other modes of transport, fails to connect directly with HS1 and the Channel Tunnel, is the subject of a Select Committee direction and a Government assurance that no provision for a direct link to Heathrow will be made as part of HS2 Phases One or Two, provides inadequate compensation to those blighted by the route and to those whose property is subject to compulsory purchase, and inflicts unnecessary environmental damage, including to wildlife habitats, ancient woodland and waterways.”

“Unless Labour and the SNP can be persuaded to vote against the Government along with Conservative rebels like me on Third Reading and inflict a defeat as they did on Sunday Trading, this legislation will pass by the end of the month.”

“This amendment, if passed, would in effect annul the legislation and would fall. I have done it in this way because I do not oppose HS2 on principle and I recognise its benefits to Birmingham. However, its execution is clumsy and expensive. By not using existing transport corridors such as routing alongside motorways and existing rail lines, it is damaging to the environment and more expensive – by at least £8 billion – than it need be due to the extra tunnelling required.”

“But it’s even worse than that! HS2 won’t connect with the Channel Tunnel and the continent or even major airports like Heathrow. Travelling to Paris from Birmingham, far from getting on the train and waking up in Paris as we had originally been promised, commuters will face a trek across London with their bags from Euston station to St Pancras station to board another train.”

“In future people will look back at this project and say ‘This was no way to design a railway’!”

email
Tags: News
News
4 comments to “Fabricant in final bid to Stop HS2 in the Commons”