From the Woodland Trust:

HS2 Ltd preparation for the Hybrid Bill includes error after error, flawed calculations, and methods that go against Government guidance in its vain attempts to justify loss and damage to 63 ancient woods along the first phase of the route, says the Woodland Trust.

If these errors are left uncorrected, not only will HS2’s vision to build the line “seeking to avoid significant adverse effects on… the natural, historic and built environment”1 be impossible, but dangerous precedents could be set for the way ancient woodland is treated in all future development decisions, including housing, road and further rail plans, UK-wide. 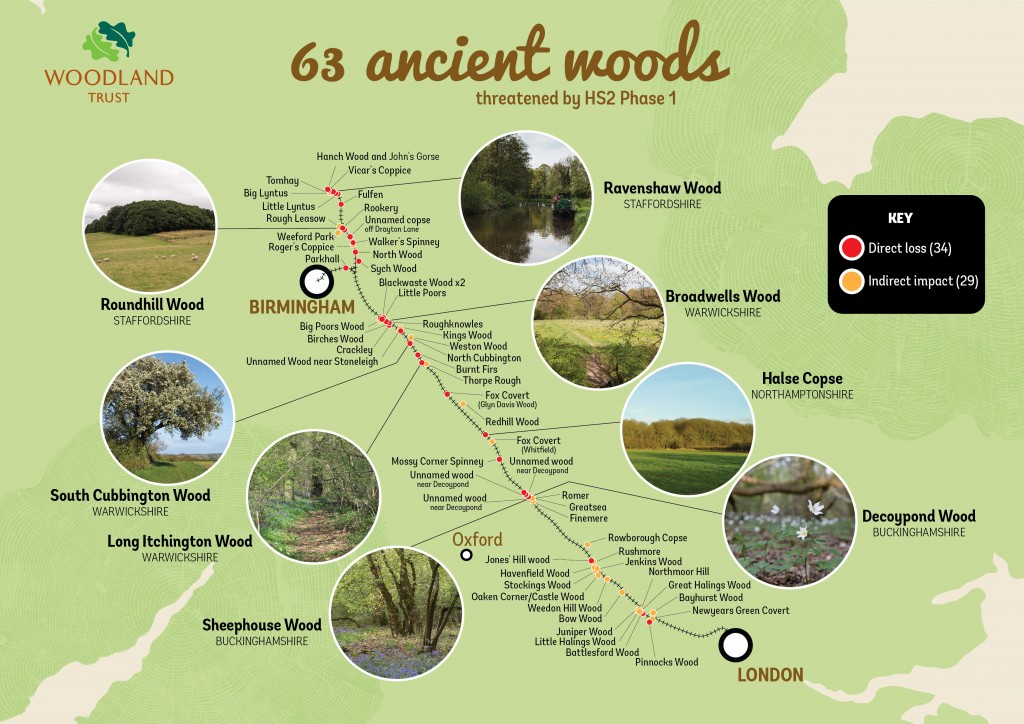 The charity, forced to petition and appear in front of the HS2 Select Committee due to HS2 Ltd’s failure to negotiate amends to the route to avoid all ancient woodland, gave evidence on the morning of Wednesday February 3rd.

Luci Ryan, Woodland Trust Ecologist, said:
“Despite years of meetings, lobbying, groundwork, research and reams of paperwork provided by the Woodland Trust to HS2 Ltd, they have not only failed to rectify errors in relation to ancient woodland, but even to fully admit them. Instead, they’re attempting to disguise the irrevocable loss and damage this irreplaceable habitat will suffer, misleading the Government, the Select Committee and the public. In doing so, it could set dangerous precedents that put ancient woodland at even greater risk in future.”

Since learning early in the process of the devastation that building HS2 could cause to ancient woodland, the Woodland Trust has pushed hard for the need to avoid all of this irreplaceable habitat – including 14 ancient woods missed by HS2 Ltd while carrying out its environmental assessments. These woods have now been added to the Ancient Woodland Inventory but they make up just one example of many that the Trust is still fighting to put right.

The Woodland Trust has uncovered the following errors by HS2 Ltd which are yet to be addressed (this list does not claim to be exhaustive). Further detail follows3:

1. HS2 Ltd will never achieve its promise of ‘no net loss of biodiversity’ if ancient woodland is lost and damaged and the newly published No Net Loss in Biodiversity Calculation clearly shows that Phase 1 does not achieve this. However, HS2 has manipulated calculations to try and prove otherwise.

2. HS2 Ltd has attempted to grade ancient woods with some given a lower quality rating – this goes against all government guidance.

3. HS2 Ltd offers no explanation for how it has calculated the number of trees that it states should be planted to compensate for trees lost. When asked, HS2 representatives will only state “professional judgement” has been used.

4. HS2 Ltd’s draft Ancient Woodland Strategy bases its justification for using translocation of ancient woodland soils on a report by the Woodland Trust (Ryan 2013) that says translocation does not work.

5. HS2 Ltd is likely to cease to exist following line construction (as HS1 did following the construction of the Channel Tunnel rail link) but no legal binding promises have been made in relation to environmental work so far – only ‘assurances’. Who will monitor the effectiveness of any of the environmental compensation provided?

Read the Woodland Trust HS2 evidence document (PDF, 1.3MB) for the full details, which highlighted a host of errors made by HS2 Ltd.

HS2 Ltd’s sustainability policy states:
“Environmental change – Commit to protection of the environment through seeking to avoid significant adverse effects on communities, businesses and the natural, historic and built environment, including the prevention of pollution. Minimise impacts where they occur and deliver enhancements as far as practicable to attain no net loss to the natural environment.”https://www.gov.uk/government/uploads/system/uploads/attachment_data/file/475766/HS2_Sustainability_Policy_P04_Nov15.pdf