Since this article was published, a petition has been launched asking for the money earmarked for HS2 to be spent on flood defence and prevention instead. To sign, click here.

Yesterday, we reported on the flooding of the proposed HS2 station site in Leeds, and the fact that one of the things which is conspicuous to residents up and down the proposed route, is that HS2 Ltd are clearly over-optimistic when it comes to flooding, with many of their maps saying land which has flooded more than once in living memory doesn’t ever flood. 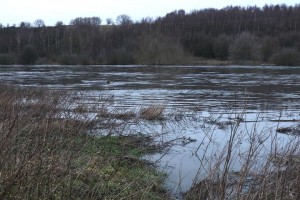 Proposed route of HS2 at Woodlesford

Of course, the objective from HS2 Ltd when designing HS2 is simply to make a railway which will not flood. How sinking massive concrete piles and structures impacts on flooding around HS2, which we covered last year in “Like Putting a Brick in Your Water Tank”, is something they have not been the slightest bit interested in. 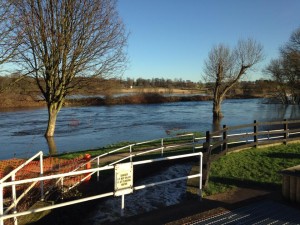 One such place, where HS2 is going to drive concrete piles into a flood plain is Woodlesford, next to the canal lock on the aptly named Aire & Calder Navigation.

I say ‘aptly named’ as the canal and river seem to have merged at the moment, though whether it is actually navigable or not at the moment is another matter.

The planned viaduct is due to be built in the area shown in these photos, which is normally a scenic picnic area. Besides the fact these floods question the sanity of this route choice, you have to ask that if the concrete piles had already been driven, would the displacement of water have made this flood worse?

Below is an aerial video of the area where HS2 is planned to be built, and more photos can be found on the SO WHAT Facebook page.