Earlier this autumn, the Spectator ran a competition for poems about HS2.  They published them in last week’s edition, but the winning entries are also online here. My favourite was by George Simmers:

There’s a thunder down the line at eleven fifty nine,
And there’ll be another due at twelve o-six.
Yes, several times each hour a train of massive power
Is hurtling busy townies through the sticks,
And leering through the glass of a window in first class
(At meadows trashed and woodlands bulldozed flat)
Is a vicious tabby gent claiming dubious descent
From Skimbleshanks, the famous Railway Cat.
His moggy grin is mirthless, mocking dwellings rendered worthless
By the track that’s scarred the centre of the nation.
Skimble Junior (‘Call me Skimby!’) hisses scorn for every nimby
Who’s inclined to sob at rural devastation.
There’s no mercy in his features for otters or such creatures
Who have lost their fine and ancient habitat.
‘Businessmen demand a beeline!’ mews this hard efficient feline,
Skimble Junior, the modern high-speed cat. 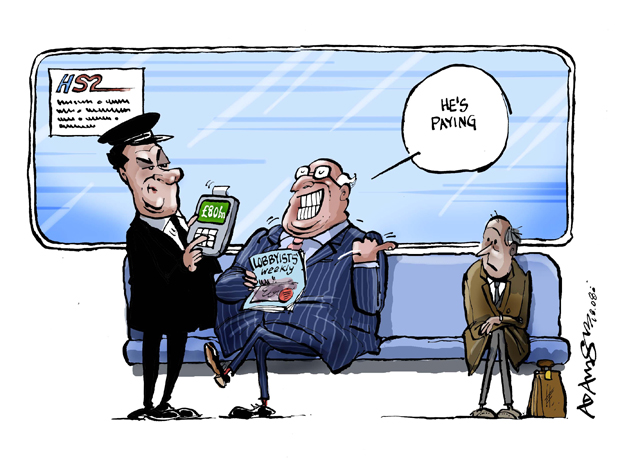