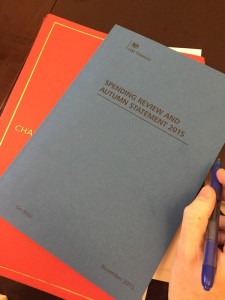 It’s the day of the Chancellor’s Spending Review. The Spending Review is intended to give a longer term view of the government’s spending plans for the next few years.

This takes them into the period when the Government hope to start building Phase 1 of HS2, and are supposed to have introduced the Hybrid Bill for Phase 2 to Parliament. It’s already known that the £50billion budget for HS2 is way out of date, but will the George Osborne revise the current figures used by the DfT or the Treasury?

The Chancellor is due to speak at about 12.30, after Prime Minister’s Questions.

We’ll be live tweeting during the Chancellor’s speech, and let you know what the Spending Review means for HS2 after that.