The information was revealed by Parliamentary Under-Secretary for Transport Robert Goodwill MP in answering a written question from Chesham and Amersham MP Cheryl Gillan. The answer revealed that the total salary costs at HS2 Ltd are £37m for 626 staff, putting the average wage at the quango at £58,809, over double the £27,600 average UK wage. 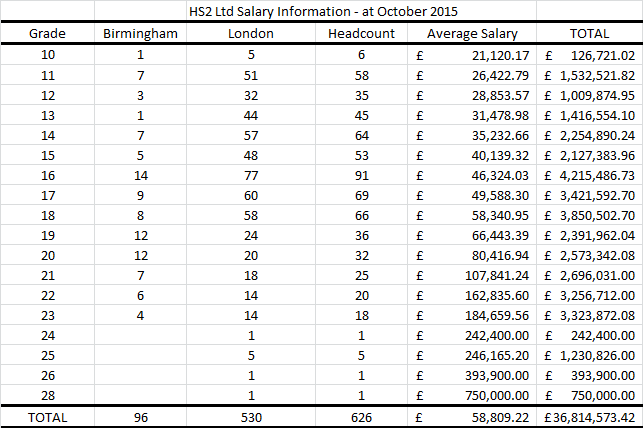 The written answer also showed that only 96 people, 15% of HS2 Ltd staff, are based in Birmingham. This is despite the fact HS2 Ltd signed a deal for 100,000sqft of office space in the city in July last year. With rents likely to be £28-30 per sqft, the premises should by now have cost at least £3.5m in rental over 15 months, which works out as over £36,000 per desk.

“It seems that George Osborne forgot to send the memo about austerity to HS2 Ltd, as the quangos bosses continue to run their own gravy train. There are an ever increasing number of snouts in an ever expanding tax-payer funded trough, as the only thing anyone at HS2 Ltd seems to know how to do is to chuck money at this financial black hole. The chief executive’s £750,000 salary is about 28 times that of the average wage in the UK.”

“With 46 people getting more than the Prime Minister and an average wage at HS2 Ltd which is over double that of the national average wage, it is clear these are grotesque salaries and a real kick in the teeth to all those whose jobs and services are under threat from cuts, which will intensify after the Autumn Statement. HS2 Ltd are simply out of control, burning money which everyone else is being told isn’t there. This gross injustice must stop, and HS2 must be cancelled.”

“The fact only 96 staff are working in 100,000 sqft of office space in Birmingham, must mean each desk in that office is costing over £36,000 per year. This just shows how wasteful HS2 Ltd are with taxpayers money, and tells you everything you need to know about the likelihood of the overall cost of the project going way, way over budget.”

“At a time when other services are being drastically reduced and support for the poorest is being cut, it is shocking to see the number of people at HS2 Ltd on this level of salary.  HS2 will not just be a fast train for fat cats when it opens, it’s also proving to be a fast buck for fat cats even before it gets parliamentary approval.”