On Thursday, a new document was published on the Government’s website – the HS2: FOI and EIR disclosure log for June 2014 to September 2015.

With a strap line that this document contained “the status of each outcome has been published alongside the subject of each information request”, it was impressive to see a list of 93 FOI requests marked as “fully met”, “partially met” and “met but some info not held”. 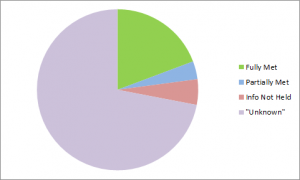 However, there is a minor problem with the statement “the status of each outcome has been published”, it’s a bare-faced lie. Not a half truth, not a euphemism, but a complete and utter lie.

Whilst HS2 Ltd tried to paint themselves as a remarkably open organisation, this is in no way reflective of how HS2 Ltd actually operates. There was a major category missed out of the document – FOI requests which were either overdue or refused, but there was no reference these missing FOIs in the log, only gaps in the numbering sequence.

It will be of no surprise that these missing requests far exceed the numbers answered. There are 239 incidences of “status unknown”, which bearing in mind how far back in time the log goes, for the majority the real status will be “refused”. 72% of all FOI requests made to HS2 Ltd in the period the log covers fall into this missing undisclosed category. It may actually be slightly more than this, as there could be requests which should slot in before the first and after the last ones which were disclosed.

For example, FOI 14-1231 is one which does not appear in the official log. It relates to a request for details of the November 2014 MPA report on HS2. This request was refused as long ago as 19th February 2015. Following the a ruling from the Information Commissioner that the information should be released in August, HS2 Ltd (and the Cabinet Office) have appealed to take the case to a Tribunal set for 21st January.

You might have thought that HS2 Ltd would know that………

And here is the Government’s list, with missed out FOI requests: HS2_Ltd_FOI_and_EIR_Partial_Disclosure_log_June_2014-September_2015