From the London Wildlife Trust:

London Wildlife Trust has recently learnt that an access road for the proposed HS2 rail link between London and Birmingham is now set to cut across one of our most valuable nature reserves. Frays Farm Meadows in Hillingdon is a Site of Special Scientific Interest (SSSI), one of only 37 in the entire Greater London region. 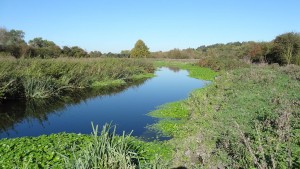 Frays Farm Meadows supports what is probably the largest remaining sedge fen in London; a rare wet grazing meadow that is home to species such as water vole, snipe and slow-worm. The proposed haulage road would slice across the northern boundary of the site, destroying habitat and threatening the entire sedge-beds for which the meadows are designated.

Significant levels of pollution will result from the resulting road, particularly nitrogen dioxide. It is feared that other pollutants will be soaked up by the wet, sponge-like conditions of the meadows, potentially harming the sedge-beds entirely and irrecoverably.

Although temporary, HS2 say the haulage road would be required for up to six years. With an anticipated start date of 2017, it would take nine years before the road could be removed and the full damage ascertained, in 2026.

Aside from pollution, destruction of habitat and severe disturbance to wildlife, the access road will also cause serious disruption to London Wildlife Trust’s care of this site. The Trust’s ability to access the reserve will be significantly constrained. The meadows are grazed by cattle and without such grazing the habitats will rapidly become overgrown and deteriorate, threatening the many species that depend on this scarce and valuable environment.

Mathew Frith, Director of Conservation at London Wildlife Trust said:
“Politicians may trumpet the questionable economic value of HS2, but nature also has a huge value – providing benefits that cannot easily be measured or understood by the bean counters and their profit and loss sheets. Frays Farm Meadows is only one small slice of nature that HS2 is threatening to destroy, but this road would reverse all the work London Wildlife Trust has undertaken to restore the nature reserve over the past decade, and may damage parts of it irrecoverably. We will fight to save it and we would urge our supporters to petition against HS2 both locally and in its entirety.”

Frays Farm meadows is a window on a medieval world. This 30 ha site – enclosed in the Colne river valley – has never been intensively farmed and supports an incredible range of birds, plants and mammals leading to the site being designated as a Site of Special Scientific Interest (SSSI). The grazing cows are on the site for the spring and summer and are helping to improve conditions for existing and new wildlife by lightly churning up the ground to open up a seed bank and encourage pooling of water.