Over the last five years, the Stop HS2 campaign has made great use of the Freedom of Information Act and the Environmental Information Regulations. Most notably was the three year battle from Dr Paul Thornton to get the details of Major Projects Authority reports which consistently labelled HS2 as ‘amber-red’. In the end, the Government finally caved in, trying to bury the bad news in the report with the bad news announced the same day of Network Rail cutbacks. However, the report when it was released made it clear those cutbacks had been expected three years earlier, stating: 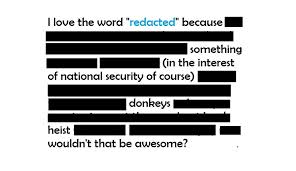 No wonder Patrick McLouhglin had fought tooth and nail to stop the publication of those reports and had even said when he exercised an earlier veto that publication would: “Create political and presentational difficulties at a crucial point in the HS2 project’s development.”

While that is an example of Government digging their heels in, many FOI requests have been successful, with some even being answered within the regulated timetable! However, plans are afoot to make heel-digging easier, and provide organisations like HS2 Ltd with more standard excuses for not providing information. As such, Stop HS2 is one of the joint signatories of a letter, published today by the Campaign for Freedom of Information. Below is the full press release from CFOI.

140 media bodies, campaign groups and others [1] have written to the Prime Minister expressing ‘serious concern’ at the government’s approach to the Freedom of Information (FOI) Act.

The organisations are particularly concerned at the Commission on Freedom of Information, announced on July 17th this year. They say its terms of reference make clear that ‘its purpose is to consider new restrictions to the Act’ [2] and that there is no indication that it is expected to consider how the right of access might need to be improved.

It points out that the Commission’s 5 members include two former home secretaries, a former permanent secretary and the chair of a body subject to the FOI Act. A government perspective on the Act’s operation ‘will be well represented on the Commission itself’ the letter says.

The organisations note that one of the Commission’s members, former Home Secretary Jack Straw, ‘has repeatedly maintained that the Act provides too great a level of disclosure’. It says he has called for information about government policy formulation to be automatically withheld, regardless of any public interest in disclosure; criticised the Supreme Court for ‘exceeding its powers’ by overturning the ministerial veto in the Prince Charles correspondence case; called for charges to be introduced for FOI requests and said it should be significantly easier to refuse requests on cost grounds. Mr Straw’s publicly expressed views cover all the main areas within the Commission’s terms of reference, the letter says. The Justice Secretary, Michael Gove, publicly commended Mr Straw’s views in the Commons, shortly before the Commission was appointed – reinforcing concerns about the government’s intentions towards the Act.

Another Commission member is Dame Patricia Hodgson, Ofcom’s chair. In 2012 Ofcom stated that ‘there is no doubt’ that the FOI Act had had a ‘chilling effect’, discouraging the proper recording of information by public authorities. The letter points out that deciding whether there has been a ‘chilling effect’ is likely to be one of the Commission’s priorities. Ofcom has also called for it to be made easier for authorities to refuse requests on cost grounds.

“An independent Commission is expected to reach its views based on the evidence presented to it rather than the pre-existing views of its members. Indeed, in appointing members to such a body we would expect the government to expressly avoid those who appear to have already reached and expressed firm views. It has done the opposite. The government does not appear to intend the Commission to carry out an independent and open minded inquiry. Such a review cannot provide a proper basis for significant changes to the FOI Act.”

The letter also expresses concern at government proposals to introduce fees for tribunal appeals against the Information Commissioner’s FOI decisions. These are currently free of charge. Government proposals would require requesters to pay £100 for an appeal based on written submissions and £600 for one involving an oral hearing. The letter says the introduction of fees for Employment Tribunal appeals has led to a drastic decrease in the number of cases brought and says a similar effect on the number of FOI appeals is likely. “Requesters often seek information about matters of public concern, so deterring them from appealing will deny the public information of wider public interest” the letter adds. It adds that the new fees are “unlikely to discourage public authorities from challenging pro-disclosure decisions, so the move will lead to an inequality of arms between requesters and authorities”.

The organisations say “We regard the FOI Act as a vital mechanism of accountability which has transformed the public’s rights to information and substantially improved the scrutiny of public authorities. We would deplore any attempt to weaken it.”

Last month, a separate letter, signed by 31 civil society organisations was sent to the Cabinet Office minister Matthew Hancock on the subject [4]. The organisations are all engaged with the UK government as part of the Open Government Partnership (OGP), an international initiative involving governments and civil society bodies from 65 countries. The organisations warned that“Proposals that limit the scope and function of the FOI Act, as these appear designed to do, are fundamentally incompatible with the Government’s wish to become and claim to already be “the most transparent government in the world”. The purpose of the OGP, in which the signatories are all involved, is to help make government more open: these proposals would have the opposite effect. They are entirely contrary to the spirit and purpose of the OGP.”

[2] For details of the Commission’s composition and terms of reference see:www.gov.uk/government/speeches/freedom-of-information-new-commission. For views on the Commission see: https://www.cfoi.org.uk/campaigns/stop-foi-restrictions

[3] The text of the letter sent by organisations involved in the Open Government Partnership and list of signatories can be found at: www.opengovernment.org.uk/resource/ogn-letter-concerns-regarding-freedom-of-information-commission-and-tribunal-fees.