Lord Adonis, who was responsible for the inception of HS2, classified opponents of the project as a “Narrow NIMBY opposition”, and once said he was “Horrified” that the Stop HS2 campaign had been allowed to have a stand at Labour Party Conference, has been appointed as a non-executive member of the HS2 Ltd board. 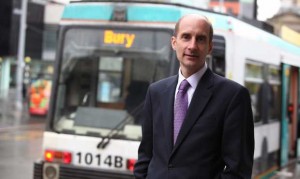 Andrew Adonis fails to see the subliminal message in this photo.

What will most likely be the biggest concern to those affected by HS2 is that last year, when giving evidence to the House of Lords Economic Affairs Committee, Adonis dismissed the idea that increasing costs of construction were relevant, but that costs rising specifically due to additional mitigation would weigh on him. Also in that evidence session, Adonis admitted that he “Couldn’t be certain” if HS2 would lead to economic growth, and that he had always been sceptical of benefit-cost analyses.

The appointment is short of becoming a dedicated HS2 minister as Adonis was fishing for in 2013, and is certainly an attempt by Government to try and shore up flagging support for the project. While polling has shown the public have remained firmly against the project since 2012, the Government until now has always been oblivious to this whilst there has been cross-party support in Westminster. 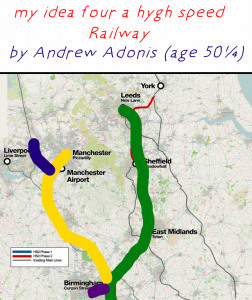 The first draft of HS2 Phase 2 by Andrew Adonis

It is likely that this is the real reason for the appointment of Andrew Adonis, to try and shore up Parliamentary support as that cross party support is slowly crumbling. The SNP cannot be expected to support the project if their demands to either have an extension to Scotland or Barnett Consequentials are met. In other parts of the country, the pausing of electrification, coupled with what are certain to be more cuts when Network Rail report back in Autumn, will surely see more questions being asked about the prioritisation of HS2.

Perhaps most relevant to Adonis is the fact that Andy Burnham has been the first Labour leadership candidate to break ranks and question the need for HS2. At Labour Party Conference in 2014, Adonis proudly boasted that he had helped a handful of Northern Councils “Demonstrate their power”, and make the party stick with its’ commitment to HS2, after then Shadow Chancellor Ed Balls had questioned whether it was “The best way to spend fifty billion pounds”.

Adonis will be paid £950 per day for approximately 2 days per month.

“Lord Adonis becoming a director of HS2 Ltd is clearly an act of desperation from Patrick McLoughlin. It seems the only person willing to take on the job is the one who caused the mess in the first place.  So many of the problems that HS2 faces were caused by the attitude within the company, which have existed ever since it was set up by Adonis.”

“Right from the start, employees working for HS2 Ltd  have had the attitude that the countryside is an irrelevance, and that the people affected by HS2 are just obstacles to be trampled on. HS2 Ltd haven’t given out information that’s been asked for, they gave up on their pathetic attempts at community engagement, and MPs in affected constituencies have called HS2 Ltd a ‘Terrible organisation’. HS2 Ltd have even been reluctant to co-operate with organisations that they need to work with, such as Transport for London.”

“There has never been any proper scrutiny within the Department for Transport of whether HS2 is the right project for the country.  Support for HS2 – both from taxpayers and from politicians – is falling away and appointing Adonis is a desperate attempt to shore it up.”

“Sir David Higgins said Andrew Adonis’ involvement so far has been one of the ‘Key factors in getting HS2 to where we are today’, and he is right. Adonis set the tone for HS2 Ltd, and since then they have pushed ahead with the project irrespective of the facts, dismissed all the rational concerns, demonised opponents and not cared about any increase in the costs, apart from costs which would lessen the impact on the communities HS2 is set to tear through.”

“Giving Andrew Adonis at job at HS2 Ltd at this point demonstrates only one thing, the Government is running scared that the all-so-important cross party support for this white elephant is hitting the buffers. With electrification having been cut back, more rail projects to surely join them in the long grass in the Autumn, a more sceptical House of Commons and heavy criticism from other Lords, this is surely an act of desperation to try and keep Adonis’ own vanity project from coming off the rails.”