This was posted on South Heath against HS2 following the select committee visit there this week.

Seemingly not much when it comes to the designation AONB!

Because of their fragile natural beauty the primary purpose of AONB (Area of Outstanding Natural Beauty) designation WAS:

This week we experienced the HS2 Select committee ‘being seen’ in these green and pleasant hills. They listened to the people who had come out in droves, despite the sudden change in date, that no doubt left many unable to reschedule at the last minute. 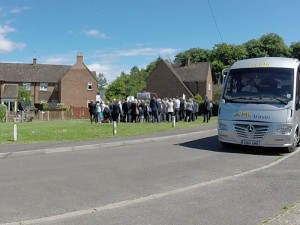 Since all the children were at school and most of the working population, were no doubt grafting away somewhere else, the assembled throng was hugely unrepresentative of the variety of people affected by the project. There was a photographer present, so any pictures would show this distortion.

One lady remarked that she had moved into the area seven years ago and had enjoyed every moment of it. “I was told that since it was an Area of Outstanding Natural Beauty, it would never be built upon”. “Then I should sue”, replied the Member of Parliament for Poole, Robert Syms, chairman of the committee.

Such environmental protection, we might well construe, is therefore not worth the paper it’s printed on. I felt prompted to ask therefore for an assurance that HS2 wasn’t “the thin end of a very thick wedge” and likely to become a “developer’s charter”.

“HS2 doesn’t have any impact upon development” replied MP Robert Syms. I suggested that anything ancillary to HS2 would pass “on the nod”. Mr Syms agreed with me saying that “Anything to do with HS2 was covered by an act of Parliament and was covered by the Hybrid Bill” and that “it did not cover housing development or anything else”.

At this point the Member of Parliament for Gateshead, Ian Mearns added that such development would require “another Act of Parliament”. I wanted to add how much easier this would be after HS2 had driven a coach and horses through the AONB, but time was pressing.

I will therefore have to save that one until we meet again.