Earlier this week, following petitioning many Ruislip area petitioners found that some people had been sent maps showing the tunnel in Ruislip at a different height to maps sent to other people.  See the Hillingdon Against HS2 website:

Residents in Ruislip are just finding out now that the Northolt tunnel in Ruislip is 15m higher up than we were led to believe. Most residents have believed that the tunnel was at a depth of 30m since 2012 but in the last few days it has transpired that engineers have not measured from ground level but from 15m above it (why? we have no idea!)

Since 2012 residents have been told and believed the HS2 tunnel in Ruislip (known as the Northolt tunnel) would be 30m deep.

In the Environmental Statement in 2013 it was stated –

HS2 Northolt tunnel
2.2.7 The Proposed Scheme will cross the western boundary of CFA5 in twin-bore tunnels.
Key permanent features of this section will include the following (see Maps CT-06-015
to CT-06-018): two tunnels, of 8.8m internal diameter, of which 4.4km is in this area and with an average depth below ground level of 30m;

In maps given to some individual petitioners before their select committe appearances in June 2015 the depth of the tunnel was stated as 29.5m. For others just a road further along it was much shallower. 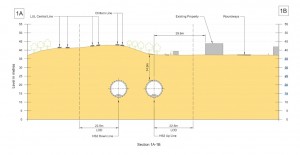 Then in late June 2015 it was discovered that the 30m depth was incorrect and HS2 confirmed the following by email:

“Further to our email exchange earlier today, I am sorry to have to say that the additional checks we said we would carry out have uncovered an error in the depth measurement presented in your exhibit (P6897).

As you may know, during the hearings today, the Chairman of the Select Committee raised with leading counsel for the Promoter, the question of whether the cross-sections which have been shown to the Committee in relation to petitioners, including yourself, who have raised settlement issues, are accurate.

I understand that the Chairman raised this issue in the light of Luke Shirley’s evidence. The Promoter is therefore looking again at all of the cross-sections which we produced and presented to the Committee.

In light of this error, we are carefully checking the other information shown on the cross-section and we expect to complete this during the course of tomorrow. We will send you a corrected copy of the cross-section as soon as those checks are completed.

I should make clear that this error is confined to the drawing which was produced for the purposes of the hearing of your petition. It does not affect the assessments of ground borne noise/vibration in the Environmental Statement, or the assessment of tunnelling induced settlement as shown on the settlement contour diagram (P6896). These assessments were carried out prior to, and independently of, the creation of the cross-section referred to above.

I apologise that we were not able to respond by 5pm as you requested. As I am sure you will appreciate, we wanted to be absolutely certain that we were now providing you with the correct information.

I am copying this email directly to Nick Hurd MP and will try to speak to him ahead of tomorrow’s hearing to ensure he is aware of the situation.

We will also explain the position to the Committee.

Once again, I can only apologise for this error and the confusion it has caused.”

They made this statement to the select committee on the morning of the 1st of July, view here from minute 9.31.21 onwards. It was officially an apology but only really for one map/document not all the other years of confusion and numerous other documents that led us to believe the tunnel was deeper than it was and therefore that our homes were safer than they are.

We have requested a full list of all the mistakes made and a full apology to us and to the committee. We have also asked that they inform all other affected residents whether they petitioned or not.

We await the promised meetings and information.