Publication of the 2014-15 annual report from the Major Projects Authority has seen HS2 has retained its’ amber/red rating, which is defined as: “Successful delivery of the project is in doubt with major risks or issues apparent in a number of key areas. Urgent action is needed to ensure these are addressed, and whether resolution is feasible.”

The report does try to excuse the amber/red rating, stating:

“The level of complexity and challenge associated with government major projects means that it is inevitable that some will, at times, be assessed as amber/red or red. These assessments signal to ministers and officials that urgent action is needed to make sure that the project will deliver its intended benefits. Moreover, the very largest and most complex projects, such as HS2 or Successor, typically face significant challenges in the early stages of planning as solutions are developed and put in place.”

However, given that HS2 has been going now for over five years this assurance seems completely hollow, and the idea that ‘urgent action’ will be actually taken to ensure the project can no longer be credible, given that the HS2 project first received an amber/red rating in November 2011. While announcing cuts to Network Rail projects yesterday, Transport Secretary Patrick McLoughlin said “All of these problems could and should have been foreseen”, a sentiment he seems to be ignoring when it comes to HS2.

Besides the overall amber/red rating, no details of the findings from the MPA have been published, with the Government choosing only to publish a response to the MPA findings from the departments responsible for each project, in a spreadsheet attached to the report. Not surprisingly, the response regarding HS2 from the DfT brushes aside the amber/red rating, claiming that ‘excellent progress’ has been made since the project was assessed.

Yesterday, The DfT pulled out of a Judicial Review, brought by the Information Commissioner and Dr Paul Thornton, into the decision to veto the publication of MPA reports on HS2 from 2011 and 2012. The DfT cited the ‘Evans Case’ which saw the publication of letters from Prince Charles as creating a precedent which made the use of the veto in this case to be ‘unsustainable’. This has seen renewed calls from calls for campaigners for the more recent reports to also be published in full. 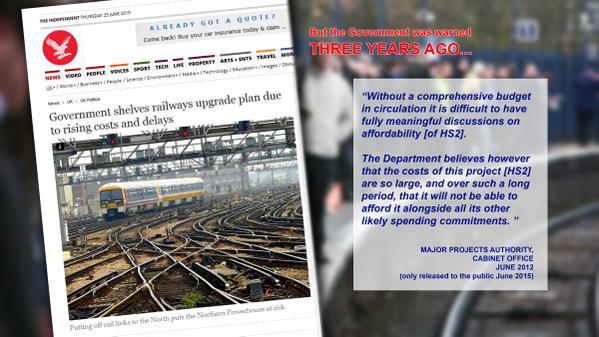 Some of the MPA information released three years late.

Currently, HS2 Ltd have refused to publish the MPA report from November 2014, which HS2 Ltd Chair Sir David Higgins admitted contains ‘75 different complex questions’, with this decision currently under review by the Information Commissioner. Several MPs stated that the reports on HS2 should have been made available, before the Hybrid Bill project was first voted on in 2014. The contents of the June 2012 report will surely see renewed calls for the more recent reports to be published, before the bill returns to the commons for the third reading. Published the day that Network Rail projects were shelved, the June ’12 report predicted that transport projects were under threat due to the costs involved with HS2, stating:

“Yesterday, when Patrick McLoughlin cut back on Network Rail projects, he said that all of the problems could and should have been foreseen, but it is clear that with HS2 the problems are being foreseen and completely ignored. It seems that every six months the MPA says the HS2 project is in doubt, that there are several major risks and that urgent action is needed, but nothing ever seems to happen. Now more than ever, it is essential that the full MPA reports on HS2 are published so MPs truly know what passing the project means for the rest of the rail network before they commit to it.”

“How many times do HS2 Ltd have to be told that they are not good enough before anything changes? It seems never, as it is the golden child which can do no wrong. To try and improve things at HS2, Sir David Higgins and Simon Kirby, who are responsible for the mess at Network Rail are now in charge, which will surely have the same effect as tying weights to a drowning man. HS2 is simply the wrong project and too high a cost and no amount of spin will change this. The decision to sneak out the MPA reports yesterday was clearly a cynical attempt to use bad news to bury even worse news.”

“We have always said that the amount of money the colossal white elephant of HS2 needs would mean cuts to other rail upgrade projects, and now we have been proved right. The reason for the cuts announced today is because all the rail projects are going over budget and we can’t pay for them and HS2 which has a £50bn cost of HS2 still based on 2011 prices. Government is about making choices, and HS2 is not only the wrong choice, but will lead to more projects being shelved as the cost spirals out of control.”

“High Speed Two keeps being given the exact same rating of amber/red by the Major Projects Authority.  As the earliest MPA reports, published for the first time on Thursday, have shown all along, HS2 was pushed on without a proper business case right from the start.  But the problems don’t stop with the business case.  Five years on, HS2 Ltd still haven’t got the plans for Euston sorted out, and they are having huge problems with the design of the route north of Birmingham.”

“The Government seem to think that HS2 will be a fig-leaf to distract from all the problems with other rail projects. But at a 2011 cost of £50billion, HS2 is a very expensive distraction which will do nothing for ordinary rail passengers.”

“At the time these reports were written, the Government were publicly claiming a myriad of benefits from HS2 while reassuring all and sundry about the costs. These reports show clearly that behind the scenes, they knew they could not substantiate those claims.”

“The situation is clearly no better now than it was in 2011. MPs should be demanding that the government must now publish the more up to date reports that have been requested.”