Frank Partridge of Denham Against HS2 writes about their stall at the Denham Village fete on 25t May:

A word of thanks to all of you who helped to make today a resounding success. Our stall looked great, topped by our new overhead sign that announced our presence to all-comers – and was possibly visible from the International Space Station – reminding the local community that Denham Against HS2 – and the STOP HS2 campaign as a whole – will continue to battle away on their behalf. 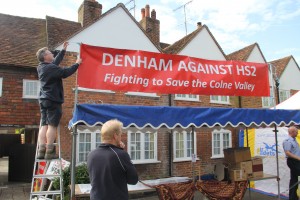 Denham Against HS2 setting up their stand

The stars of the show were Julian and Doreen, who between them developed a simple idea at our last committee meeting and turned it into the Feed the Elephant ‘coconut shy’ that attracted hundreds of passers-by to have a go at winning the star prize of £50, and spent almost the entire day running what I truly believe was the best attraction at the Fayre. People were queuing to join in the fun. A fantastic effort from both of you – great thanks.

Apologies to Paul, who nobly appeared at an unearthly hour thinking he might be able to slip away by mid-morning, and spent the best part of four hours explaining the issues and interpreting the maps to all and sundry. His wife Paula, suffering from an eye condition following an unfortunate horticultural incident, mingled with the arriving throng in Village Road, handed out half a tonne of literature and pointed them in the right direction. Diane and Richard, braving the coldest and windiest corner of the Home Counties, also kept going for hours to keep the show running, and James somehow managed to slip away from his own stall up the road to have a few spicy conversations with visitors who uttered those dreaded words: “Of course, it’s a done deal”.

No it’s not, and congratulations to Mr Gibbs for keeping his cool and gently persuading these people that perhaps they might have jumped the gun. The Select Committee still has 1,400 petitions to hear. There’s still a lot to play for, believe me.

Paul, our new treasurer, manned the stall for a while sporting a rather trendy kangaroo pouch containing one of his sleeping twin daughters, aged about eight weeks. Paul will correct me if I’ve got the stats wrong! One of the reasons we’re fighting this battle is to protect the next generation of Denham and Colne Valley inhabitants who might have to live with the spectre of HS2, and his twins will be eleven or twelve if and when the first phase is completed. We must do what we can to protect the environment where Paul and Suz’s little lovelies have entered the world.

When I eventually manage to prise the cash boxes from Hazel’s grasp, and assuming that she hasn’t spent it all on new garden features for Kayalami, I’m sure I’ll be able to confirm that we’ve raised more money than at any of the four Fayres we’ve done in the past. Watch this space …

… and thanks again to all, with apologies to those I haven’t mentioned, who contributed to a truly great day.