HS2 Ltd have today published their response to the interim report of the Parliamentary HS2 Hybrid Bill Committee, with little on offer for affected individuals and communities. In total, the committee made 116 recommendations, but HS2 Ltd have only responded to 58, exactly half of them. Lowlights in the statement from HS2 Ltd include the refusal to fast-track compensation claims from the terminally ill to protect the ‘quality’ of decisions, and the refusal to pre-qualify blighted communities for compensation, because it is too difficult to figure out what a ‘neighbour’ is.

In their report, published before the election, the HS2 Committee stated:

“Another issue was the lack of an adequate expedited process in cases of terminal illness. The new scheme must rectify this. We expect urgent applications to be considered urgently.”

However, HS2 Ltd today stated that such applicants would instead get a phone call within two days, and be updated on the progress of their application, going on to say:

“We feel that in such circumstances, this approach would be a far more appropriate and productive method of dealing with a case as opposed to setting more stringent deadlines for the processing the case which could simply result in a poorer quality decision from the independent panel.”

To try and speed compensation claims along, the committee demanded:

“There should be a mechanism whereby those in areas of particular blight can avoid the need repeatedly to approach local estate agents for evidence of inability to sell.”

However, HS2 Ltd rejected this proposal citing “Difficulties in defining the limits of what constitutes a ‘neighbouring’ property.” 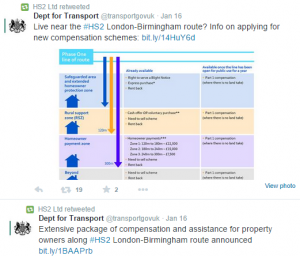 This is the entirety of the social media ‘campaign’ from HS2 Ltd promoting the new compensation schemes.

The committee report also asked how extensively the new compensation schemes have been advertised. Despite the fact HS2 Ltd claimed they had written to everyone within 1km of the route about the consultation for the schemes, they said when the scheme was actually announced they had only written to everyone within 300 metres of the route this time, along with everyone who responded to the consultation, neither or which seem to be true. They also stated that “Social media activity was undertaken (using twitter) to promote the launch.” This ‘activity’ consisted of a total output of retweeting just two tweets from the Department of Transport.

In response to a query about the role of the ‘Residents’ Commissioner’, the Government say they have set her the lofty goal of ensuring that HS2 Ltd are ‘competent’.

“Yet again, HS2 Ltd have proven that they do not care about the stress and heartache that they cause to real people with real lives, and have come up with the most pathetic excuses possible. The committee of MPs scrutinising HS2 have asked them to be humane, and do the right thing in fast-tracking compensation claims for those who are terminally ill, but this unfeeling organisation is more concerned with the ‘quality’ of compensation decisions, despite the fact these claims should clearly be put through on the nod.”

“The committee said they wanted a system whereby people in an area clearly blighted by HS2 wouldn’t have to jump through so many hoops to get compensation, but HS2 Ltd have seriously said it is too difficult to assess which houses are next door to each other. In telling people about the new compensation scheme, them seem to think a social media campaign consists of two retweets, and while they thought it was necessary to tell everyone within a kilometre about the compensation consultation, they trimmed that to 300 metres when it came to telling people about the final scheme itself. There are simply no words to describe how rubbish they are.”

“In this report, HS2 Ltd show just what a low bar they have set themselves, they are a callous, uncaring, incompetent organisation.  For instance, the report says that the Residents Commissioner, who won’t actually speak to residents, will make sure that HS2 Ltd are competent in their dealings with people affected by HS2.  HS2 Ltd say that they will do nothing to speed up compensation claims from people who are dying, but someone from HS2 will ring them up.”

“While some of the activities in the document sound impressive, at closer look they were pathetic.  The report referred to social media activity to promote new compensation schemes, but all HS2 Ltd did was to retweet three tweets from the Department of Transport. To put this in context, the following week, the HS2 social media team retweeted four tweets of advice on finding a new job.”

“The Government plans to spend £50billion of taxpayer money on a company which thinks not being incompetent is a noteworthy goal.”

“There have long been concerns about the local community funds for communities that are directly affected by HS2 construction.  These are merely aimed at maintaining the quality of life of people affected by HS2.  We are concerned that these funds will be used to replace facilities that HS2 Ltd should be replacing anyway.”

“What’s worse for communities is that HS2 Ltd are already admitting that some areas will not get grants from these funds.  The amount allocated, which is significantly less than 1% of the HS2 budget is simply not enough.”