With less than a day to go before the General Election, it is a surprise to many commentators that so many people have still not made up their minds about who to vote for. With so little difference on substantive issues from so many parties, no clear vote grabbing policies and an election campaign which has been both omnipresent and bland at the same time, it is easy to see why.

So if you are one of the many undecided voters out there, we hope you will make HS2 your ‘Red Line’ tomorrow when you cast your vote. It doesn’t matter why you are against HS2, as there are so many, many reasons why this is the wrong project. 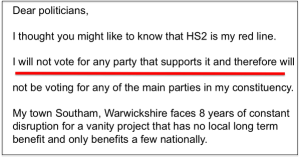 There are so many more reasons why HS2 is the wrong thing to do, but despite all of this, despite all the platitudes and the promises to mitigate in the areas set to be devastated, the political leaders who support HS2 have not listened to the inescapable conclusion: HS2 should not happen, HS2 should be stopped.

May 7th represents the best chance we have all got to be heard, but voting for a candidate from a party opposed to HS2. It doesn’t matter if you do not think a candidate from a party opposing HS2 will not win where you live, the fact that votes which were expected to go one way end up going another will be noticed by those who matter, especially given the political climate which is likely to exist after the election.

So please make HS2 your own personal ‘Red Line’ on May 7th, and vote for a party opposed to HS2.

A graphic on where parties stand on HS2