The both the Department for Transport and HS2 Ltd have decided not to publish polling concerning the HS2 project, paid for by the taxpayer, before the General Election takes place next week. This week, both bodies have responded to requests made under the Freedom of Information Act, with both claiming they need more time to decide whether or not publication is in the public interest. This is despite the fact that HS2 Ltd agreed to a similar FOI request in May 2013 to publish all data concerning opinion polls on HS2 which had been conducted up by Government to that date, without any argument or delay. 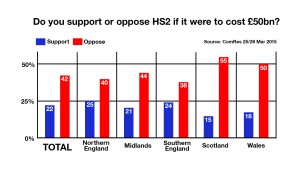 During the course of polling carried out by ComRes in March, which found that only 22% of the public support HS2 at the current £50bn price tag, the Stop HS2 campaign learned that another polling company had been engaged by HS2 Ltd to carry out similar surveys. However, the results of the Government commissioned polling had not been released in any form, so FOI requests were submitted to both HS2 Ltd and the DfT.

To highlight the lack of joined up thinking between HS2 Ltd and the DfT, the two bodies have now come up with different possible excuses for withholding the information in the public interest, with the DfT saying the information may relate to the formulation or development of government policy, whilst HS2 Ltd claim releasing the data may be prejudicial to the effective conduct of Public Affairs.

“Your request, however, raises some complex public interest considerations which must be analysed before we can come to a decision on releasing the information. The exemption that applies to the information you have requested is section 35(1)(a) which exempts information held by a Government Department if it relates to the formulation or development of government policy. The relevant text of the exemption is attached at Annex A.”

“In your case we need to extend our response time limit by 20 working days in order to assess whether it is in the public interest to disclose or withhold the information. Therefore, we plan to let you have a response by Monday 1st June 2015.  If  there  is  a  need  for  any  further  extension  we  will  keep  you informed.”

Whilst on 1st May HS2 Ltd wrote:

“We believe that the following exemption is likely to apply to the information which you have requested: S36 Prejudice to the effective conduct of Public Affairs. This exemption is subject to a public interest test and we have not yet been able to conclude our consideration of the relevant issues to be able to make a decision on the public interest. Accordingly, we will need more time to conclude this analysis and to come to a decision (for which extension of time is permitted by the relevant legislation). We will deal with this as quickly as we reasonably can, but will need a further 20 working days to do so and will be in touch with our decision on or before 2 June 2015.”

With the HS2 project being used by political parties in the run-up to the General Election, the Stop HS2 campaign maintains that parties from the previous Government, who both support HS2, would find it embarrassing if the polling data was released, and as a result have ensured it is supressed until after the election. This is supported by the fact the Conservatives have this week been trying to woo voters in the Midlands and the North with HS2, despite the ComRes survey showing support levels for the project in those areas are 21% and 25% respectively.

“The Government decided the taxpayer should pay for opinion polls on HS2 to be conducted, but for some reason decided not to publish the data. Now, two Government bodies are coming up with two phoney excuses why publishing the results isn’t in the public interest, even though a precedent has been set which demands the release of the information. It is clear what is going on here, this Government commissioned opinion poll, like all the other opinion polls conducted on HS2 in the last two years, will have provided a clear conclusion that the public don’t want this white elephant, but with some parties making HS2 a central plank of their election strategy in some key seats, the last thing they want is for voters to be reminded just what a bad idea this politicians vanity project is.”

Penny Gaines, chair of Stop HS2 said:“Numerous independent polls have shown that few people see any point in HS2 and few people want HS2.  It looks like the results of the polling is being kept secret, just like numerous other government sponsored reports critical of HS2, in an effort to hide the facts about this useless white elephant”

“HS2 is a £50 billion white elephant.  The economic case uses outdated assumptions about business travel, and building it will be hugely environmentally damaging.  The case for HS2 collapsed years ago, but the Department for Transport seem determined to push forward none the less.  Whichever government gets in after the election, they will have to make public the spending on HS2. We call on all Parliamentary candidates to look closely at the plans, and for the incoming Government to cancel it as soon as possible.”