A plan backed by Sir David Attenborough to protect the first nature reserve in the world from HS2 has been undermined by the Prime Minister, who has today said he wants the part which would go through it between Leeds and Sheffield to be built sooner than planned.

Last week, Sir David Attenborough backed the campaign to have the Walton Hall Estate near Wakefield recognised as a UNESCO World Heritage site, but as that process could take up to ten years, if Mr Cameron has his way, by that time HS2 will be being constructed to run through it. 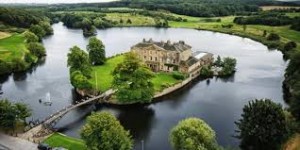 Walton Hall on the Waterton Estate. Yep, HS2 is planned to go through this area.

When Charles Waterton built a wall around his estate in the 1820s, he made Walton Hall the site of the first nature reserve in the world, and last week Sir David wrote to Wakefield Council, saying:

“Walton Hall is an extremely important site in the history of nature conservation worldwide. It is, arguably, the first tract of land anywhere in modern times to be protected, guarded and maintained as a nature reserve. I hope very much UNESCO will recognise the importance of the Walton estate by declaring it a World Heritage Site.”

As part of the process of becoming a UNESCO World Heritage site. Walton Hall would have to be nominated by the Department for Culture, Media and Sport. That has potentially become less likely, as on a constituency tour of Yorkshire and Lincolnshire, David Cameron has said he wants the HS2 link between Sheffield and Leeds to be ‘fast tracked’ as a standalone project, with the possibility that construction could start in five years.

Whilst Sir David Higgins has said that the Leeds-Sheffield section of HS2 could be operational before other parts of Phase 2 of HS2 there is one big question; ‘Why?’, as all it would realistically be until plugged into the rest of network is a shuttle service from the middle of Leeds to Meadowhall shopping centre. As such,  operation would require a masssive subsidy.

Though if course the real answer to ‘Why?’ is there is an election coming up and David Cameron, like so many politicians has this crazy idea in his head that HS2 is a vote-winner. The reality is that the latest polling, conducted just a couple of weeks ago shows that only 22% of the public support HS2, given the £50bn budget. In Yorkshire, which with two planned stations is supposedly one of the ‘big winners’ from HS2, that figure is only marginally better, with just 24% in support of HS2. That figure comes down sharply if the price goes above £50bn, which it is certain to do.

email
Tags: News
News
3 comments to “Sir David Attenborough derailed by Cameron on plan to save nature reserve from HS2”