With the General Election in full swing, sometimes when politicians make statements, you find yourself with a sudden urge to punch the face on your TV screen, or throw your computer out of the window for telling you such rubbish. One such incident happened yesterday, as on the day of the SNP manifesto launch, both David Cameron and George Osborne tried to make out that if the SNP hold the balance of power, there would be no HS2 station in Crewe, which would cost the area a billion pounds.

Making a speech in a state-owned train maintenance depot, albeit owned by the German state, Osborne said Crewe could lose the HS2 station because of the SNP, which is just wrong on so many levels. 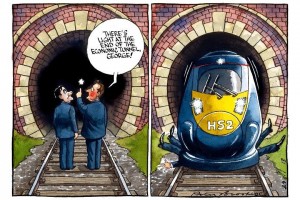 Supporting HS2 could be more dangerous than some politicians think.

First of course is that as far as we are aware, there is no Crewe HS2 station, well at least officially. Whilst we keep being told that ‘no decision has been made’ on whether there would be a station near Crewe, Stoke on Trent, or neither, the reality is that a station no-one has ever costed or been consulted on a mile or so south of the current Crewe station is on the cards, it’s just that no-one has been willing to confirm it yet.

So obviously with there being an election coming up and next to no Conservative votes to be found in Stoke, David Cameron decided to ditch due process and told the Crewe Chronicle: “

MPs need to fight for resources and make the case in Westminster for their constituencies. Edward has worked hard for Crewe and Nantwich, and the results have been fantastic: HS2 is now coming to Crewe, with a new station, and six years early at that.”

Accepting that Cameron has decided on Crewe, and lets just reiterate it’s not Crewe, but the green belt at Basford, what about that SNP ‘threat’? Well, it seems George & Dave had failed to spot that the SNP manifesto actually says:

Now we don’t know about you, but we fail to see how that could possibly be interpreted in a way that could lead you to draw the conclusion that that would mean no station for Crewe.

Finally, there is the idea that having a new station a couple of miles away from the current Crewe station is worth £1bn. This isn’t an official Government figure, but one which has been made up by people lobbying for the station, and like most of these figures ‘made up’ is the only way to describe it. The reality is clear. If having rail transport links means economic growth and prosperity, then Crewe, a railway town, would be one of the most prosperous places in the country. The fact isn’t should be the only proof needed that HS2 won’t deliver on the promises being made, and the best case scenario if a station were to be built, that Basford might find itself becoming a London commuter suburb.

There is one thing of course that both the Conservatives and the SNP can agree on, they have agreed on, but of course neither are saying. That is, whether you are looking at building a new station in Cheshire or a new link to Scotland, the cost of HS2 goes up.

This factor is of course crucial, because the one thing that the SNP, Lib-Dems, Conservatives and Labour all seem to have missed is that the public don’t want it. The latest polling shows that with the current official £50bn cost of HS2 (which is based on 2011 prices), only 22% of the public want it. The polls show that as the costs increase, the approval rating plummets below it’s already rock-bottom levels.

And that is maybe the biggest problem with what is being said by all these parties, somehow as they continue their bubble-like existence they are convinced HS2 is a vote-winner, when it absolutely, definitely is exactly the opposite, whether that is in Crewe, or indeed Scotland.