A Freedom of Information request submitted by The Express and Star has revealed that HS2 Ltd currently have 26 staff earning over £100,000 per year, with 18 of them earning more than David Cameron, who is on a salary of £142,000. In addition to this, it has been revealed that HS2 Ltd almost spent a million pounds on lawyers appearing in front of the HS2 Hybrid Bill Committee in the House of Commons up to January.

The number of executives on such salaries actually represents another missed target from HS2 Ltd, as chairman Sir David Higgins who is now paid just £244,000 after going onto a three-day week, told BBC Newsnight back in July 2014 that the project will need “20 to 30 senior people to be paid more than the Prime Minister, within the next six months.”. At the time he justified this by saying “The worst money you can save is skimping on paying the best people.”

New chief executive Simon Kirby remains the highest paid civil servant in the country, on a salary of £750,000.  Although the appointment of Kirby was announced in January 2014, he did not start work with HS2 Ltd until June last year, as that allowed him to cash in on a £300,000 ‘loyalty bonus’ from previous employers Network Rail which had been intended to stop him from leaving that organisation.

While Kirby worked under Higgins at Network Rail, their profits went down whilst their debts went up, which Higgins defended this week by saying; “Every major infrastructure company in the world is most efficiently funded by debt… These infrastructure projects are suited to debt because of the long term earning stream.” 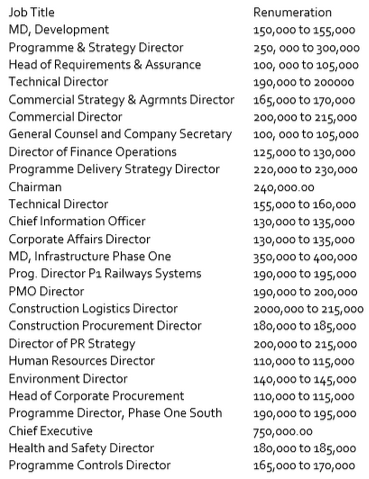 The full list of jobs HS2 Ltd are paying over £100,000 for. And no, we don’t think the Construction Logisitics Director is on two million, this information is exactly what HS2 Ltd sent out.

One name which sticks out is Tom Kelly, the former Blair spin doctor who is best remembered for his part in The Hutton Inquiry, when he compared deceased weapons expert Dr David Kelly to fictional fantasist Walter Mitty a week after his apparent suicide.

Mr Kelly, who is on £200,000-£215,000 was once described by Ian Paisley as ‘making Machiavelli look like a rank amateur’, following the leaking of a document from the Northern Ireland Office which claimed there would be an all-embracing media propaganda campaign in which opinion polls would be manipulated in the run-up any referendum on the Good Friday Agreement. It is understood that since Mr Kelly joined HS2 Ltd, they have engaged Ipsos MORI to undertake polling on the project.

The figures were released after a Freedom of Information request and also show that 176 staff members are paid more than £50,000.

In addition to these salaries, a parliamentary answer to Cheryl Gillan MP has revealed that the legal team of five barristers and two QCs who have been representing HS2 Ltd at the Commons Hybrid Bill Committee, were paid hourly rates equating to £890,184 (inc VAT, 741,820 ex VAT) between April 2014 and January 2015. Bearing in mind that this period has included Parliamentary recesses, the total by now will have easily passed the million pounds mark.

“We have always said HS2 is all about jobs for the boys, and the bosses seem to be running their own gravy train. It seems there are an ever increasing number of snouts in an ever expanding tax-payer funded trough, as the only thing anyone at HS2 Ltd seems to know how to do is to chuck money at this financial black hole. Those in charge of HS2 don’t seem to care what the costs will be, they just all want a slice of the action. These levels of pay are absolutely disgusting and it is everyday taxpayers who have to pick up the cheque.”

“The chief executive’s £750,000 salary is about 28 times that of the average wage in the UK. This is a grotesque salary for anyone in the public sector be getting, and can anyone really agree that the man in charge of putting together a giant train set is over three times the value of the person in charge of the NHS? It now turns out that Simon Kirby stayed on an extra couple of months at Network Rail just to cash in on a £300,000 loyalty bonus and then immediately left. This displays there is a complete lack of integrity shown by those at the heart of this project.”

“Senior HS2 salaries started high, and have been getting astronomical. When Simon Kirby replaced Alison Munro as CEO of HS2 Ltd, his new salary was 6 times hers, and she was getting a 6 figure sum. HS2 is being treated very much as a jobs for the boys free for all, and high paid jobs at that.”

“HS2 is a £50 billion white elephant.  These HS3 proposals are a bribe to try and get people to overlook the major flaws in HS2. The HS2 economic case uses outdated assumptions about business travel, and building it will be hugely environmentally damaging.  The case for HS2 collapsed years ago, but the Department for Transport seem determined to push forward none the less.   We call on all Parliamentary candidates to look closely at the plans, and for the incoming Government to cancel HS2 as soon as possible.”