In an unexpected move, the Secretary of State for Transport has ordered that a noise barrier should be installed to protect a riding school as part of works to the Chiltern Line, a decision which could potentially set a precedent when HS2 is built. 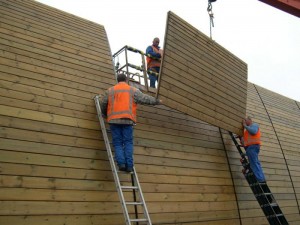 According to Network Rail, this is impossible.

The DfT has put a condition on the planning application from Chiltern Railways & Network Rail that they should install an effective noise barrier at Wendlebury Gate Riding School near Bicester, as otherwise the trains would drown out communication between riders and their instructor.

Despite the fact what passes as an ‘effective sound barrier’ could also be described as a ‘wooden fence’, Network Rail are fighting tooth and nail against having to nip down to B&Q, claiming that installing an effective noise barrier is ‘impossible’.

As you may be aware, sticking some posts in the ground and nailing some planks across them is not, as Network Rail contend, on the same level of practicality as trying to split the atom with a bread knife. This denial of reality can only really lead one to this logical conclusion: that they are coming up with any old crap excuse because they don’t want to do it. 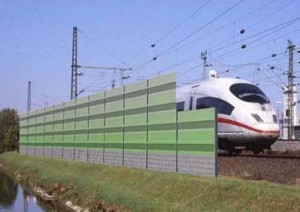 A fancy noise barrier, as recommended by Deutsche Bahn, but not Chiltern Railways, who are owned by err, Deutsche Bahn.

You might be excused for thinking their reticence from Network Rail is due to cost, and there you might have something.

It won’t be down to the fact that Deutsche Bahn, the owners of Chiltern Railways approve slightly more expensive technologically advanced fences, but more so because of the precedent this would cause. While you might hope, and indeed with this project it is the case, that homes and offices will be protected with sound barriers, in the case of the riding school the sound barrier has been ordered by the Secretary of State to protect an open space, and there are lots of open spaces which railways go past.

Of course Wendlebury Gate is more than simply an open space, it is a business providing over 4000 lessons per year and jobs to 15 people, an amenity which would not be viable with increased noise levels. If Wendlebury Gate were to get their noise barrier, this could easily be cited as a precedent for businesses and amenities having to deal with the much higher noise levels which HS2 will create.

As such, here is their petition, which asks the Secretary of State to hold firm and make sure they do get their fence.