Following the announcement of the July inflation figures, which put the Retail Price Index (RPI) at 2.5%, regulated rail fares across the UK rail network will increase on average by 3.5%, as the annual increase which comes into effect in January is pegged to 1% above the July RPI. Previously, train operators were allowed to increase some routes by an extra 5% as long as the average increase remains RPI plus 1%, though last year the Chancellor capped the ‘flex’ at 2%, and it would be a surprise in an election year if Mr Osborne chose not to do this again, but again as it an election year, expect any such announcement to happen closer to the election. 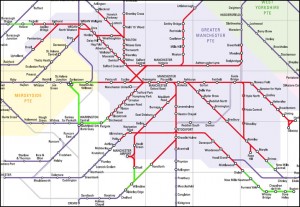 Evening peak hours will come into effect in Greater Manchester on the routes shown in red. Some services on green lines will also be hit.

The Consumer Price Index (CPI), which many observers say is a fairer measure of inflation for July has come in at 1.6%. Using the RPI will mean that when the January increases come into effect, rail fares will have risen by almost 25% since 2010, compared to wages which will have gone up by under 7% over the same period.

However, it is far worse news for those who use Northern Rail services. They are due to introduce peak pricing to the evening on routes in Greater Manchester, West Yorkshire and South Yorkshire between 4.01 and 6.29pm, and from 4.01 to 5.59pm on the Newcastle – Hexham line. Those increases will come into effect from Monday September 8th 2014, just in time for Labour Party Conference in Manchester. 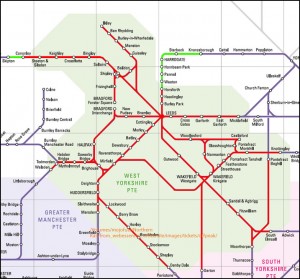 Evening peak hours will come into effect in West Yorkshire on the routes shown in red. Some services on green lines will also be hit.

These changes are being made despite the fact that many passengers don’t actually pay for journeys on Northern Rail trains, with David Sidebottom, Passenger Focus’s passenger team director, saying:

“We have urged Northern Rail to concentrate on collecting fares owed to them before putting up prices. Our 2012 research in the North of England found that passengers were already confused about fare structures and rules, this move will add to that confusion. Passengers were also frustrated that fares go uncollected either because there are no ticket facilities at the station, or because passengers cannot find a guard to sell them a ticket. Investment is needed to improve services for passengers across the North of England. However, disproportionate fare increases for some passengers before there is any visible benefit from that investment seems premature as the affordable ‘turn up and go’ railway is eroded.” 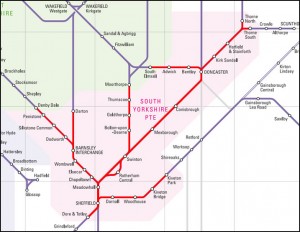 Evening peak hours will come into effect in South Yorkshire on the routes shown in red.

Of course, there could be far worse news for passengers in West Yorkshire, as for some reason there is an  agreement with the West Yorkshire Passenger Transport Executive which means come January individual regulated fares can rise at the RPI plus a maximum of 8%, meaning fares around Leeds, Bradford, Halifax, Harrogate, Huddersfield and Wakefield could go up in January by as much as 10.5%, on top of  the introduction of the evening peak fares in September.

Evening peak hours will come into effect on the Hexham-Newcastle service.

The excuse used for fare increases of course is always that investment is needed in the railway and that the train companies only make profits of around 3%, happily ignoring the grotesque profits of the train leasing companies (ROSCOs). If the way to pay for investment in railways is to jack up fares, how much more will they have to go up to pay for HS2?