Yesterday, the DfT announced that 1500 jobs at HS2 construction headquarters would be sited in Birmingham, stating that a further 14,000 jobs could be expected as a result of HS2 in the city and that this would bring economic benefits of £1.3bn, a level lower than the £1.55bn of economic benefits projected by KPMG in their infamous report of last year. 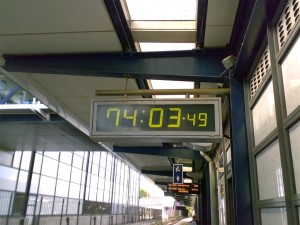 Of course with a little pulling at the loose threads, these figures quickly fall apart. The first thing to look at is these 1,500 jobs are ‘up to’ 1,500 jobs and rely in part on HS2 Ltd staff, apart from those involved in the Parliamentary process, being willing to move to Birmingham. Whether any staff who chose to move will be asked to sacrifice the London Weighting on their salaries is unknown.

It is also unlikely that this will make any difference to Sir David Higgins wanting to take 20-30 people on at salaries above that of the Prime Minister at £140,000, as when he made in known that he wants so many underlings to be paid more than the average London CEO salary of £120,000, the plans for the move to Birmingham were well underway.

It is also unknown just why HS2 Ltd would need so many staff to complement their already bloated ranks, when Crossrail has a permanent staff of just 500. In a move typical with the overall ethos of the HS2 project, HS2 Ltd plan to move to an office block next to Snow Hill station, the building of which has permanently scuppered any possibility of extending the station to its original size and capacity.

Also as part of the announcement, a new development company has been launched, which is supposed to regenerate Eastside, the area around Curzon Street, and create 14,000 jobs. Just how this is meant to happen is unknown, as the only part of that area where any development could take place is where the station itself would have to go. In fact, if it were not for HS2, the regeneration of the area would have been completed a couple of years ago, as Birmingham City University had to cut back their planned relocation to the site. Besides the inclusion of a cinema in the Think Tank complex, all the regeneration of the site so far has consisted of relocating jobs from other areas of Birmingham. The forecasts for jobs of course neglects to point out the fact that Liam Bryne MP has said the planned HS2 depot at Washwood Heath would destroy the economy of East Birmingham, meaning up to 7,200 jobs planned for the former LDV and Alsthom sites would not be created.

Even the promoters of HS2 were off message when confronted about the figures, with Andy Street of the Birmingham LEP saying “It can’t actually be accurate”, and despite HS2 Ltd saying almost ten times the number of jobs HS2 would directly move to Birmingham would be created by the project, council leader Albert Bore played this down, saying: “I think you’ll get a multiplier of two to threefold on that number of one thousand five hundred.”

“It’s a bit like watching the numbers round on Countdown where they press a button and a random number appears. You’ve seen talk of 14,000 jobs being created with no real evidence of how to support them. They are saying £1.3bn worth of economic benefits, last year they were saying £1.5bn, and that’s without moving the jobs, so it’s actually gone down, which shows you about the credibility of HS2 Ltds figures, that they are simply making these up.”

email
Tags: News
News
One comment to “McLoughlin announces latest set of made up HS2 figures.”