For most local councils along the route of HS2, joining – or even founding – the 51m group of local authorities was a pretty obvious thing to do, but not so Staffordshire County Council. As such, they haven’t even debated the prospect so far, but now will have to following a petition organised by Marston Against HS2. 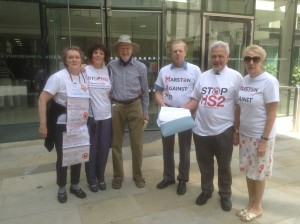 After canvassing in all weathers around the county, a petition of 5600 signatures was handed in last week, to go on top of 400 signatures submitted on the council website.

The council required a minimum of 5000 signatures to trigger a debate at full council level about joining 51M, the group of 19 local authorities who have joined together in a national campaign to actively challenge the HS2 project.

Last week, the group lead by Bob Gasch met with Dean Sargeant of SCC to hand over 5600 signatures to add to the petition numbers bringing the total to around 6000.