This week, two reports have been published which hit hard at the case for HS2. Firstly, the Office for National Statistics has shown that 4.2 million people, or 14% of those in employment now work from home, whilst the Office of Rail Regulation has shown long-distance travel dropping for the second quarter in a row to 4.8 billion passenger kilometres. 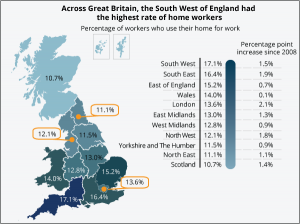 When the ONS first started compiling figures for home working in 2009, there were 2.9 million home workers (11.1%), but since then the growth of the internet has meant those in higher paid occupations and managerial positions now make up account for 73.4% of those working from home.

Commenting on this report, Frances O’Grady, general secretary of the TUC, said: 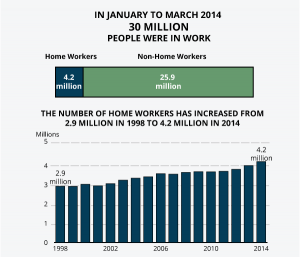 “Improvements in home technology have made home-working an attractive and cheap alternative to costly commutes into the office. But too many bosses still don’t trust staff to work from home and instead force them to trudge into the office so they can keep an eye on them. Employers’ attitudes to new working practices must change to make a much better use of modern technology in all workplaces.”

HS2 is of course intended to do little in itself to relieve pressure on commuters going in to the office each day, as it delivers capacity where it is least needed, on long-distance rail routes. The fact this is not where capacity is needed has been demonstrated by the latest set of figures from the Office or Rail Regulation, which showed that long-distance passenger kilometres dropped last quarter (2013-14 Q4) from 4.9bn to 4.8bn. In 2013-14 Q2 the figure had been 5bn passenger kilometres. With two consecutive quarters of falling figures, the number of miles travelled by long-distance passengers is in recession for the first time in eleven years.

While the number of fourth quarter long distance passenger journeys has risen slightly from 31.1 (2012-13) to 3.13 (2013-14) million journeys, this number is still below the figure from two years ago (2011-12) of 31.9 million journeys, showing that long-distance passenger numbers have stagnated. In contrast, short distance commuter journeys within London and the South East, which make up over 70% of all rail journeys in the UK, have continued to rise.

“HS2 is all about providing spending billions of pounds to provide long-distance capacity on the rail network, but there are fewer long-distance passengers than two years ago, and the distances being travelled are in recession, so it is going to get harder to justify this white elephant. We have already seen some commentators say that because the ORR figures show overall rail growth, they prove the need for HS2, but that just demonstrates sheer laziness, and a complete ignorance of what these statistics actually mean.”

“The figures released this week, which show long-distance travel on the decline and home-working on the increase should both set more alarm bells ringing about the supposed the need for HS2, whilst also clearly showing where the priority for infrastructure investment should really lie. HS2 should be cancelled and politicians should start thinking about what the country really needs before more money is wasted on this unnecessary project.”

“For a long time, the Department for Transport has been saying HS2 is necessary because of the growth in passenger numbers on the trains.  But these latest figures show that HS2 is answering the wrong question.  The real rail growth story is in in regional and commuter trains, but HS2 will provide only long distance services.  With the increasing numbers of people using the internet to work at home, it’s clear that the Department for Transport has a blinkered view of what’s happening in the real world.  They should cancel HS2 immediately, so they can work out the real answers to our communications and transport needs.”