A three-line whip from the Government benches, coupled with a rather apathetic support from Labour, meant that the second reading of the HS2 Hybrid Bill passed yesterday, with over 150 MPs not bothering to vote either way. Not that it looks like anyone cares, but a precedent was created, as for the first time, MPs voted for a Bill knowing that the Government had overturned a legal ruling demanding that documents containing relevant information about the bill, the Major Projects Authority report, be made public. 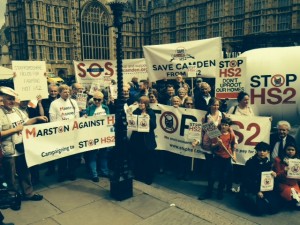 There will now be a Judicial Review into the non-disclosure of the Major Projects Authority report, publication of which was vetoed by McLoughlin. Secretary of State for Transport Patrick McLoughlin gave a speech cram-packed with bare faced lies, such as the idea that the UK has only 67 miles of high speed railway, and you can take a high speed train from London to Lille, but not London to Leeds. The reality is that McLoughlin recently posed for photos declaring the Midland Mainline a ‘high speed railway’, as it now fits the international definition, running at 125mph, which the East Coast Mainline from London to Leeds has done for decades. It went downhill from there, with his shadow Mary Creagh quoting figures from HS2 Ltd, which HS2 Ltd themselves have revised down, followed by a procession of MPs who had quote simply got their facts wrong. Amongst the rare gems of informed opposition was unexpected rebel Sir John Randal, who after quoting Churchill, in that MPs should put country first, constituency second and party third said: “I am not putting my constituency first, but my country, as HS2 will destroy too much of it.”. Despite that statement, and the fact that Green Party Leader Natalie Bennett had addressed a Stop HS2 rally outside Parliament, in a typically bizarre move, London Mayor Boris Johnson said of environmental opposition to HS2 that “It’s bollocks. They’re not campaigning for forests, they’re not campaigning for butterflies. They pretend to be obviously, but what they’re really furious about is that their house prices are getting it.”

The London Mayor went on to show he hasn’t got the first clue what he is talking about, claiming that there isn’t a tree in the entire country which is over 200 years old. 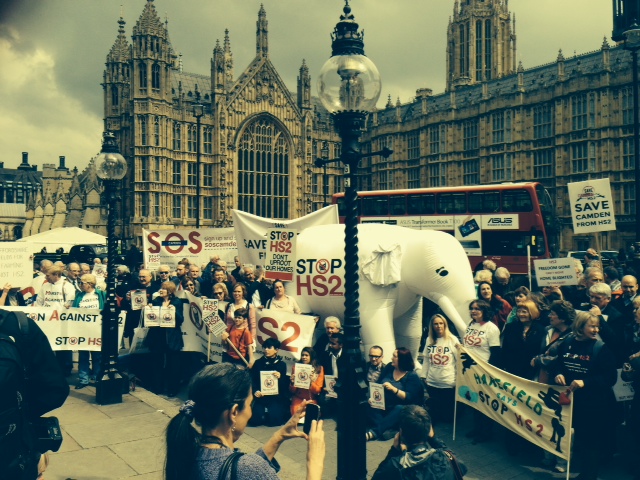 Stop HS2 Campaign Manager Joe Rukin said: “What we saw today undermines democracy at its core. We saw MPs willing to vote for a Bill because their party had told them to do so, knowing they did not all the facts, knowing that a Government report critical which was critical of HS2 was censored, because it would be harder for them to vote for it if everyone knew the truth. Irrespective of what you think of HS2, the fact MPs have said ‘We don’t know and we don’t care’ about a commitment to spend well over the official 2011 cost of £50 billion should have everyone worried about the competency of all the MPs who voted for this bill.” “The MPs who spoke for HS2 were sickeningly ill-informed, and willing to spout anything they had been told to say. Surely some of them at least knew that they were quoting disproven lies, but because they might sound good to people not in possession of the facts they had no shame in saying them. I challenge any MP who spoke for HS2 today to get in a real debate about the project, because I know they will come up short and not be able to deal with the truth.”  “When Boris Johnson says that people who say HS2 is bad for the environment are talking bollocks and only really interested in their house prices, you suspect he is bring a family argument to the national media and is talking about his dad. He clearly isn’t talking about the likes of the Woodland Trust, The Wildlife Trusts or the Green Party. Whilst Boris and his dad may have differing views on the impact of HS2, both my son and I are genuinely concerned about the environmental impacts of HS2, and neither of us own a house, so we know is Boris is talking Bollocks.” “Everyone opposed to HS2 has to keep on fighting. Not only do we want to make HS2 the most toxic issue at the next election, but you have to remember that as Frank Dobson keeps pointing out, that the original plans for HS1 got all the way to committee stage, and the committee threw them out. That is why everyone concerned about HS2 now has to petition against it.” Stop HS2 Chair, Penny Gaines said: “The Government whips have clearly gone into overdrive for fear of a backbench rebellion.  But even with a three-line whip from both the Coalition government and the Labour opposition there were still 150 MPs who abstained.” “Mary Creagh, the shadow Transport Secretary was shockingly ill-informed about the details of HS2.  She used out of date figures for both modal shift and the carbon costs, even though last year HS2 Ltd downgraded both of these last year.  She admitted that she hadn’t actually seen the Major Projects Authority reports which rated HS2 in serious danger of failing. The Labour leadership claim to want close scrutiny of the project in committee stage, while refusing to ask the real question of whether HS2 is in the interests of the nation as a whole”   “However, in committee stage is the way in which HS2 Ltd have ignored the concerns of individuals and groups during the development of their plans will become apparent to MPs.  Even supporters of HS2, like Birmingham City Council are planning to petition about major problems with the plans in Birmingham.”