As HS2 Ltd prepare to publish a summary of responses to the HS2 Phase 1 Environmental Statement, under-secretary of state for transport, Robert Goodwill, has angered people affected by the project, claiming many will submit ‘vexatious petitions’ to ‘gum up’ the Hybrid Bill process, opposed to them feeling it is their only right of appeal after being ignored by HS2 Ltd for four years.

Goodwill said he expected “Petitions for vexatious reasons to gum up the process.” whilst giving evidence to the House of Commons Environmental Audit Committee on Wednesday 26th March, saying that the “The big challenge [for the Hybrid Bill Committee] is to separate these petitions from the genuine types.” Goodwill had started the session saying that Government had has sought to reduce the environmental impacts as much as possible from the start of the project, a view not held by communities along the route and environmental campaign groups. 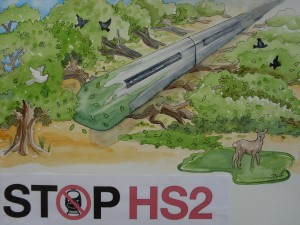 As an example of the sketchiness of the HS2 Environmental Statement, Goodwill reiterated the official line, that HS2 Phase 1 will directly affect 19 ancient woodlands, despite the Woodland Trust putting this number at 27, with a further 22 at risk of secondary effects. In the latter stages of the session, Peter Miller of HS2 Ltd admitted that after four years of developing HS2 that their “ancient woodland directory might not have picked up all the sites”, and that “there are ancient woodlands which could have been surveyed, but haven’t ”.

As a kick in the teeth to communities and local authorities, it was claimed that there had been exhaustive “consultation & engagement” and that it was “difficult to engage with local authorities”. The reality is that communities have continually found the engagement process totally frustrating as HS2 Ltd have treated community forums and bilateral meetings as tick-box exercises, with Nick Rose of the 51m coalition of councils telling the Committee last week:

“We were told half-truths. We were told `that’s the way we are going to do things’. We were given nothing. They were not interested in anything we said. Everything was set in stone. We found the process pretty much futile. The whole exercise was nothing short of a cynical charade.”

“In saying HS2 Ltd have made a comprehensive environmental report, politicians have clearly mixed up ‘comprehensive’ with ‘incomprehensible’. People in our campaign have always been pragmatic, wanting to Stop HS2, but knowing we had to be lobbying for improvements and mitigation if it does happen. Communities and councils along the route have been treated with disdain and ignored for four years, as HS2 Ltd have gone through the motions, thinking holding regular meetings where they would put their fingers in their ears counts as ‘engagement’.”

“In saying people will submit vexatious petitions to the HS2 Hybrid Bill, Robert Goodwill is being condescending and disingenuous. HS2 Ltd have caused four years of vexation along the proposed route by ignoring legitimate concerns, ignoring environmental impacts and ignoring well-constructed proposals to mitigate HS2. There will be hundreds of petitions submitted against the Bill that would not have happened if HS2 Ltd had listened to communities or bothered to adequately assess the environmental damage. They will only have themselves to blame.”