Following last weeks ‘HS2 Plus’ report from Sir David Higgins which proposed the removal of the proposed link between HS1 & HS2 through Camden, Transport Secretary Patrick McLoughlin has confirmed in the House of Commons that he will be seeking to remove this provision from the HS2 Hybrid Bill, a move which may well see the UK taken back to court by the EU. 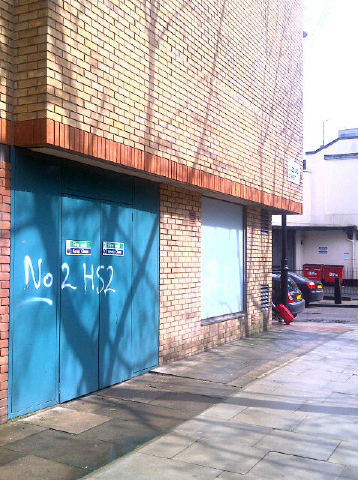 HS2 – The view from Camden.

Whilst mainstream politicians have consistently claimed that the HS2 programme is not being driven by the EU, the UK has previously been found guilty of failing to implement an EU directive on the interoperability of the trans-European high-speed rail system. Directive 96/48/EC aims to ease the circulation of high-speed trains through the various train networks of the European Union, with Member States asked to harmonise their high-speed rail systems in order to create an interoperable European network.

“[The Court] Declares that, by failing to adopt within the prescribed period the laws, regulations and administrative provisions necessary to comply with the Council Directive 96/48/EC of 23rd July 1996 on the interoperability of the trans-European high-speed rail system, the United Kingdom has failed to fulfil its obligations under that directive; [and] Orders the UK to pay the costs.”

“UK politicians have been adamant that HS2 has nothing to do with the EU, quietly hoping that everyone misses the fact the UK was found guilty of not implementing an EU directive which calls for an interoperable European network. No-one can argue that that having to walk between Euston and St Pancras qualifies as an ‘interoperable rail network’, no matter how good an airport-style moving walkway might be built.”

“The link between HS2 and HS1 hasn’t been cancelled, it has merely been delayed, because the proposal to devastate Camden by using the North London Line was absolutely insane. It is almost certain that the link will be revisited and restored, but at much higher cost, because the EU will demand it.”