Since the formation of Stop HS2 in 2010, we have seen numerous justifications used at different times by the Government and HS2 Ltd to support this project.  Each of these justifications have been dropped when it’s been shown that HS2 won’t get the results its proponents say it will.

The March 2014 relaunch of HS2 by the new chair is the sixth relaunch since the start of the project.  Each time, the claims for HS2 get more nebulous and the promised results more dependent on other factors which are not included in the HS2 proposals and will not be paid for out of the £50 billion budget.

As demonstrated by the recently announced plans for a ‘garden city’ at Ebbsfleet, following the failure of the HS1 station there to generate new jobs in the area, simply putting in a station on a high speed link does not automatically lead to economic growth in the area.  What’s worse, with HS2, reports produced for HS2 Ltd show that any extra jobs in an area near an HS2 station will have come other areas in the UK.  Growth from HS2 will come at the expense of Cornwall, East Anglia, the South Coast and Aberdeen, as well as numerous other places.

There is no environmental justification for HS2. Most travellers on HS2 would otherwise have used conventional rail.  The few journeys (5%) that HS2 Ltd say will have come from car and air travellers are far outweighed by the ‘new’ passengers who would otherwise not have travelled.  HS2 Ltd admit that until at least 2086 carbon emissions from HS2 will exceed carbon savings.

Due to the design speed of HS2, it will blast through numerous sensitive wildlife sites, including ancient woodland, with a devastating effect on bats, birds and other wildlife.

Costs of HS2 have steadily increased.  The Conservatives originally suggested a budget of £20 billion, but when Phase 2 was first proposed the expected cost was £43 billion. Last summer the budget jumped to £50 billion.  The current chair looked into cutting costs of the project, but instead kept the budget the same, and dropped the link from HS2 to HS1.  A potential link from HS2 to Heathrow was ‘paused’ indefinitely last year.

As well as the devastating effect on the environment, HS2 will also devastate individuals and communities.  HS2 Ltd have persistently refused to engage in a meaningful way with individuals and communities, saying that problems with the plans can be dealt with at the Petitioning stage of the Hybrid Bill.  Even organisations that support HS2 want to petition, because HS2 Ltd have refused to deal with real practical problems with the HS2 proposals.The Phase 1 Hybrid Bill will not pass before the 2015 general election: the petitioning stage of Crossrail, a much smaller project, took 22 months.


Stop HS2 has tens of thousands of supporters who oppose HS2 across the country. We have lots of leaflets, posters and other information that you can download from our toolbox.  And you can get t-shirts, mugs, flags etc, from our online shop. 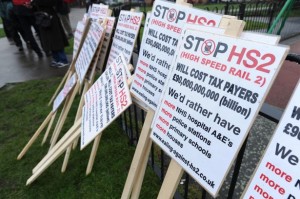