Three members of the High Speed Rail Industry Leaders Group, who last week warned that cancelling HS2 would“stifle Britain” have got contracts worth £141m out of the project, according to figures published by the Department for Transport. Additionally, Westbourne Communications, the PR company whose founder Lord Bethell said of opponents to HS2 that he wanted to “shit them up”, have been paid almost half a million pounds; £446,608 by HS2 Ltd and the DfT. 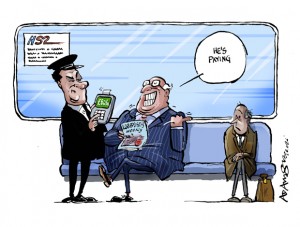 Last week, the High Speed Rail Industry Leaders Group, which those three companies sit on, warned that failing to build HS2 will leave a clogged Britain, unable to meet its full potential, and lagging behind the rest of the world in terms of infrastructure development. The report also claimed that cancelling HS2 would make the UK less attractive to investors, that it lead to a brain drain, and that cancelling HS2 would mean £5bn in costs will have been needlessly lost and not recouped, despite only around £1bn having been spent on HS2 so far.

In April 2013, when Westbourne Communications had only been paid £61,000, pressure group Spinwatch alleged they were running an “astroturfing” campaign, which is when a movement is portrayed as a grassroots initiative but is actually run on behalf of corporate interests. The founder of Westbourne Communications, the 5th Baron Bethell, had previously explained that his campaign sought to paint a picture of “posh people standing in the way of working-class people getting jobs”. Westbourne have now been paid £446,608 for their HS2 advocacy services.

“The case for HS2 is getting worse and worse, with the £50bn price tag looking even more unaffordable, and it becoming clearer that HS2 is the wrong priority for the country. Given that backdrop, the only people now lobbying for HS2 to happen are those who think they will make money out of it. We have always known HS2 has only got this far by being pushed forward by strong lobbying from advocates. Having people from the rail industry who are getting millions of pounds worth of contracts pulling out all the stops to keep that flow of cash going is as transparent as Cadbury saying Easter is a good thing.”

“The worst thing is that so much public money is being spent on spin to con the public into thinking HS2 is a good idea. It is a sad indictment of the way politics operates that such tactics are supported by government and taxpayers’ money. The tactics employed by HS2 advocates have been clear since the start, demonise opponents, spread scare stories about what would happen if HS2 doesn’t go ahead, and invent massively optimistic benefits which will never materialise, but it is clear the public are not swallowing it.”

“Next week we will have the sixth relaunch of HS2. It shouldn’t take a genius to realise that if something is any good, it doesn’t need relaunching six times, and neither would it need Tony Blairs former spin doctor, who has just been taken on to try and do what he and HS2 Ltd have always tried to do: con the public.”