A survey conducted by Bradford Chamber of Commerce has shows that 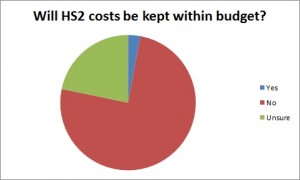 businesses in the city are exceptional sceptical about HS2, with only 5% or respondents thinking it will come in on budget and only 27% feelling that there is a good case for building HS2.

Respondents to the survey saw completely through the spin being used to justify HS2, with information coming out of the summary of responses including: 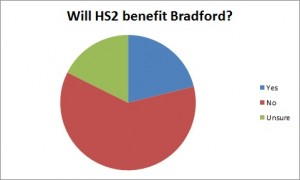 They do not believe the business case put forward expounding the benefits, and would much prefer the money budgeted for the project to be allocated to other transport schemes (including rail) that will provide clearer advantages and improvements. 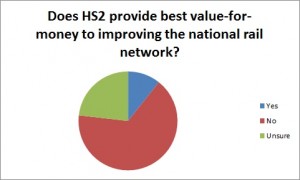 It is stressed by many that passengers numbers/journeys on long-distance travel is reducing, not increasing, and so the validity and need for HS2 is questioned. Rapidly-changing technology and high travel cost suggest that long-distance travel volumes will continue to fall in the future. 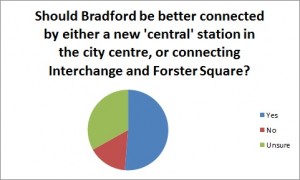 Although it is acknowledged that more rail capacity is needed, it is clear to many businesses that this scheme is not the best option to address that. The additional capacity needed on trains is mostly required on local commuter journeys, not long-distance travel. 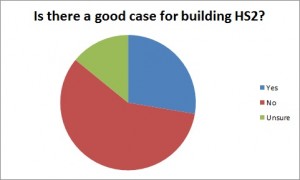 Companies also feared that budget costs will spiral out of control due to the extremely long time-frame set out for project completion. The power station needed to provide energy to HS2 has also not been included in the costs yet.

HS2 is disconnected from much of the rest of the UK rail network. The scheme has gone from promoting speed as the key benefit, to capacity. Little or nothing has been said about connectivity. The HS2 line and stations remains isolated from most other cities, junctions and stations and so full benefit of such a big scheme is not maximised. 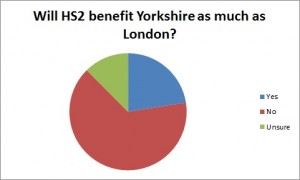 Most survey respondents believe the benefits of HS2 will be to London and the south-east. Potential investment in Yorkshire will be diverted to the south. Benefit-cost ratio diminishes the further south from Leeds that you travel. 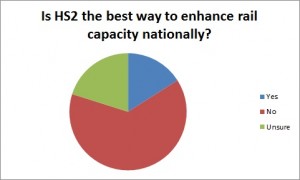 Many businesses believe that the politicians backing HS2 are misguided and should urgently reconsider their support.

“The findings show that Bradford businesses are deeply sceptical about the HS2 proposal.” 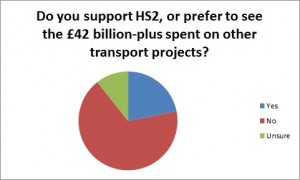 “As the line is not set to come to Bradford anyway, it is probably to be expected that support here is lower than in places like Sheffield and Leeds; but the divide between support and opposition is so wide that we feel that, even if the scheme were to come to Bradford, there would still be many doubts that this is the best value-for-money project for the rail network. 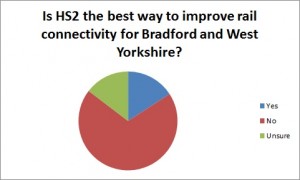 “Businesses want to see investment in transport improvements. Whether that’s infrastructure for capacity and connectivity, services to improve point-to-point links, or other specific measures to ease congestion.

“However many see this scheme as either too expensive, providing benefits mainly to London, or they challenge the business case being used to defend HS2.  It’s time to go back to the drawing board and think again.”