Deep within documents buried by HS2 Ltd, Stop HS2 has found that HS2 Ltd have kept the projected running costs of the network down, by assuming that there will be no upward variation in the retail industrial price of electricity except for inflation, ignoring their own forecasts for energy price rises.

Whilst having made a forecast for electricity prices, HS2 Ltd decided to ignore it and use the baseline 2011 price without any assumption of beyond inflation increases. The costings were made in 2013, when HS2 Ltd already knew that electricity prices had risen by 20% since the 2011 figure they decided to use.

HS2 Ltd may have decided not to trust their forecast as for 70 years from 2030 to 2100, they again assumed there would be no increase beyond inflation in electricity prices. However, it is more likely that they wished to ignore 18 years of projected inflation busting increases, which end three years after Phase 1 of HS2 is due to open, when HS2 have actually forecast a reduction in electricity prices.

In another move to keep costs down, HS2 Ltd have used power consumption figures for 200 metre trains, when the actual trains planned to go on dedicated HS2 routes would be 400 metres long and require more power. It is also the case that none of the staff working on HS2 after it opens are forecast to ever get a real terms pay rise.

At over six billion pounds for sixty years, which equates to around £180m per year, electricity costs represent the largest single item of the HS2 running costs. In a spreadsheet labelled ‘Phase 1 and Full Network Costs’, which accompanied the October 2013 ‘Economic Case for HS2’, HS2 Ltd detail their forecasts for industrial electricity prices. 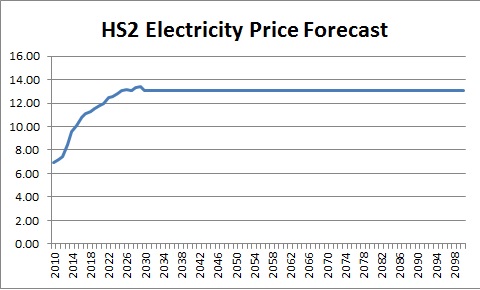 Between 2011, the baseline year, and 2029, HS2 Ltd forecast that the retail industrial price of electricity will almost double from 7.19p to 13.45p per kilowatt hour. This represents an 87% increase over inflation in 18 years, which HS2 Ltd have chosen to ignore in their overall cost calculations. However, HS2 Ltd then forecast that in 2030, prices will drop to 13.05p/kWh just after Phase 1 is due to open, and remain at that level until 2100. This would represent a 3% decrease in electricity prices, after inflation. All figures are based on a 2011 baseline.

It is also case that electricity costs have the smallest contingency rating of all HS2 costs, set at just 10%, whilst staffing has a contingency of 30%, and maintenance and insurance are set at 41%.

“This is another of HS2 Ltd’s fantasies, where nothing changes except for their new train line being built.  However, when you look back over recent decades, there have been some major game changers over the decades when it comes to electricity prices, such as the oil shocks of the seventies.  They’ve ignored the changes to travel and communication happening as a result of the internet, now they are ignoring other possible changes.”

“Changes to electricity prices will have a larger effect on the running costs for HS2 than anything else, but HS2 Ltd have given them the least contingency.  The figures might look good on paper, but as with so much else in this white elephant of a project, in reality, it is likely to be very different.”

“Yet again HS2 Ltd have fiddled the figures to try and make this vanity project look less like a white elephant. While those of us who live in the real world know that private companies use every excuse under the sun to implement exorbitant inflation-busting price hikes, but in the spin-driven world of HS2, they have decided to ignore their own price forecasts and say this never happens, because it would bump up the costs. This, along with them deciding to use power output figures for trains half the size of those actually planned for, shows yet again they are making things up as they go along to try and con the public and politicians.”

“It also seems that while the bloated quango has no problem in paying disgustingly high wages to the staff drawing up HS2, they have decided that no-one who actually ends up working on the railway would every receive a real terms pay rise. These figures are simply not worth the paper they are printed on.”